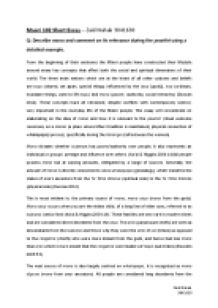 Maori Culture. Describe mana and comment on its relevance during the powhiri using a detailed example.

ï»¿Maori 102 Short Essay – Zaid Nahab 3041630 Q: Describe mana and comment on its relevance during the powhiri using a detailed example. From the beginning of their existence the MÄori people have constructed their lifestyle around many key concepts that affect both the social and spiritual dimensions of their world. The three main notions which are at the heart of all other customs and beliefs are tapu (shared, set apart, special things; influenced by the atua [gods]), noa (ordinary, mundane things, used to lift tapu) and mana (power, authority; social hierarchy) (Duncan 2012). These concepts have all remained, despite conflicts with contemporary science, very important in the everyday life of the MÄori people. This essay will concentrate on elaborating on the idea of mana and how it is relevant to the powhiri (ritual welcome ceremony on a marae (a place where MÄori tradition is maintained; physical connection of whakapapa)) process, specifically during the Karanga (call between the women). Mana dictates whether a person has power/authority over people, it also represents an individual or groups’ prestige and influence over others. ...read more.

to everyone in their society (Duncan 2012). Mana tÅ«puna is deeply embedded near the top of the MÄori social hierarchy, this helps certain people to uphold social control and maintain their customs, beliefs and rituals (Patterson 1992:148). Mana whenua (mana from land), is also largely dependent on whakapapa, however, on this occasion it is more concerned with the physical world. HapÅ«, families and individuals can all trace their whakapapa to a particular piece of land, which they recognize as their ‘home’ as it is where their tÅ«puna originated from (Duncan 2012). The status of a land depends on its importance over history, a location that is wÄhi tapu (area of significance), would generate more mana for its people than ordinary land (Patterson 1992:148). The people that have rights or responsibilities to the land gain mana from it (Ka’ai & Higgins 2004:14). The whenua (land) is a very important component to MÄori culture due to their tikanga (way of doing things), which incorporates the whenua as what gives nourishment while alive (Durie 1998:117). ...read more.

Mana is clearly evident through the expression of mana whaine (power of women). This is of significance because the powhiri will not begin without the karanga, and it displays the mana that MÄori women have (due to their birth giving abilities) (Ka’ai & Higgins 2004:77). The MÄori culture is one of the few cultures that believe the spiritual world and physical world are intermingled and because of this, their way of life is based on beautiful concepts which, if followed, ensure a harmonious life. Mana in all its different facets, is a vital component in this system as it exhibits respect towards others, acknowledges those that care for their community, and most importantly it retains the memory of ancestors and what they achieved. The powhiri is also an important ritual, both in traditional and contemporary times, as it ultimately symbolises MÄori tradition, and is the gateway to many important ceremonies such as the Tangihanga (funeral). The two phenomena are closely linked in many ways, as was demonstrated through the example of the karanga. ...read more.