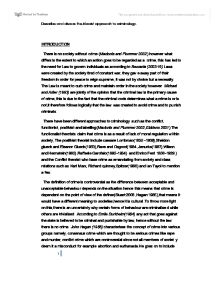 INTRODUCTION There is no society without crime (Macionis and Plummer 2002) however what differs is the extent to which an action goes to be regarded as a crime, this has led to the need for Law to govern Individuals as according to Beccaria (2003:16) Laws were created by the society tired of constant war, they gave away part of their freedom in order for peace to reign supreme, it was not by choice but a necessity. The Law is meant to curb crime and maintain order in the society however Michael and Adler (1993) are jointly of the opinion that the criminal law is the primary cause of crime, this is due to the fact that the criminal code determines what a crime is or is not,it therefore follows logically that the law was created to avoid crime and to punish criminals. There have been different approaches to criminology such as the conflict, functionist, positivist and labelling(Macionis and Plummer 2002,Giddens 2001).The functionalist theorists claim that crime is as a result of lack of moral regulation within society, The positivist theorist include caesare Lombroso(1835-1909),Sheldon glueck and Eleanor Glueck(1950),Rave and Osgood(1984,Jenucks(1987),Wilson and Herrnstein(1985),Raffaele Garofalo(1895-1934) and Enrico Ferri 1856-1929.) and the Conflict theorist who base crime as emanciating from society and class relations such as Karl Marx, Richard quinney,Spitzer(1980) and Ian Tayol to mention a few. ...read more.

MARXIST ON CRIME Marx himself did not speak at length on the topic of crime however his followers referred to as Marxist give extended views of his opinion,they are characterised as conflict theorist and link crime directly to capitalism(Bilton et al 2002).To fully comprehend this theory on crime it is important to have background knowledge on the general views of Karl Marx capitalism as a system of government which dwell on the state and its means of production. In his opinion, there are two classes in a capitalist society; the ruling class who own the means of production (known as the Bourgeoisie) and the working class (known as the proletariat) who have to work so as to earn a living. He sees crime as the product of class society (Bottomore 1983:100).That is crime is dependent on ones social stand in society whether rich or working class.,He goes on to explain that they are of the belief that capitalism creates crime as the means of production are not equally distributed resulting in a very visible line between who is rich and who is poor, this inevitably leads to class conflict . The type of crimes and laws depend on the means of production whether it is owned by the state, small group of workers or other strata. According to Chambliss (2003:249),the capitalist societies are more prone to crime than others because there is a desire to consume by all (both the ruling and working class) ...read more.

is pushed to feel insignificant and helpless aggression is transferred to the nearest neighbour hence the working class are still fighting the system but through the nearest individual whom is not even the main source of their disgruntlement.I agree with Marxist view on crime because the state which comprise of the ruling class protect themselves directly or indirectly to the detriment of the lower class and renders them voiceless with nowhere to go for justice this frustration is manifested in form of needless strikes and riots resulting mostly in unemployment and possibly death. Marx never argued that the ruling class do not commit crime, they do but through bribery and redrafting the law they averted punishment he just said it was more rampant in the working class due to economic factors. Another criticism on Marxist approach to criminology is that they fail to give working solutions to crime but shift focus to capitalism (Lea and young 1993), that is concerning themselves with class and constantly blaming the rich in the society instead of objectively looking for ways to stop crime. Conclusion Although the concept of crime is complicated, a working definition of crime has been clearly show as any act that goes against the criminal law. There have been brief explanations of the different theories of crime which are conflict, positivist, Functionist and labelling and I have dwelt on the Marxist theory of crime who base their argument on capitalism. ...read more.