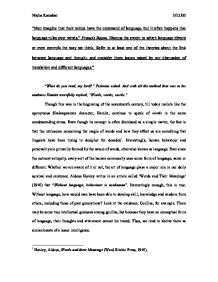 &quot;Men imagine that their minds have the command of language, but it often happens that language rules over minds.&quot; Francis Bacon. Discuss.

"Men imagine that their minds have the command of language, but it often happens that language rules over minds." Francis Bacon. Discuss the extent to which language directs or even controls the way we think. Refer to at least one of the theories about the link between language and thought, and consider them issues raised by our discussion of translation and different languages." "What do you read, my lord?" Polonius asked. And with all the method that was in his madness Hamlet scornfully replied, "Words, words, words." Though this was in the beginning of the seventeenth century, till today realists like the eponymous Shakespearean character, Hamlet, continue to speak of words in the same condescending stress. Even though its concept is often dismissed as a simple matter, the fact is that the intricacies concerning the magic of words and how they affect us are something that linguists have been trying to decipher for decades1. Interestingly, human behaviour and personality are primarily formed by the nature of words, otherwise known as language. Ever since the outmost antiquity, every sort of the human community uses some form of language, same or different. Whether we are aware of it or not, the art of language plays a major role in our daily survival and existence. Aldous Huxley writes in an article called 'Words and Their Meanings' (1940) ...read more.

It is language that helps us organize reality into certain fragments to force it within the limits of understanding. In many cases it is just the environment around us being abridged to numbers and theories, e.g. Temperature. We can now see that language offers us justification of our experiences and is a major factor affecting our thought. Though the relationship between the two is tricky in theory, in practise it is unbelievably simple. So can language really determine how we perceive the world around us? In one sense, of course not. If we all live in one world, how is it possible for two people in the same world to perceive different worlds? The world will remain as is, no matter what language the observer uses. A potato will be a potato in every language. However, what about the French that call a potato a "pomme de terre" (meaning 'apple of the earth' in English)? While the label 'potato' indicates what it is, the word "pomme de terre" illustrates its characteristics. Here is genuine evidence that languages of various cultures do tend to control our knowledge and intelligence of certain aspects3. Not only do languages control knowledge, but values as well. A study was done a few years ago to prove this on Japanese/American women who were both fluent in Japanese and English. ...read more.

But for numbers I have shown that a limitation in language affects cognition," claims Gordon.6 There are many more studies and experiments that provide empirical evidence for the Sapir-Whorf Hypothesis. By now, we have given numerous reasons behind the power of language. We know that language facilitates us to organize reality into our frame of understanding; we know that language controls our knowledge, upholds our values, and shapes our personal thought... What does language not do? It seems that language is an integral part of our lives and there would be a lack of civilization today without it. Language's role in thought is not completely vital, but it obviously exists to make our lives amazingly easier than they would have been if language was absent. To put it simply, a man named Oliver Wendell Holmes proclaimed that "Language is the blood of the soul into which thoughts run and out of which they grow"7. Based on our indications, it is interesting to think that by limitation of vocabulary, we are able to discipline other aspects as well. Presently, mankind's quest for knowledge is only barred by limitations of language and its control over what we can and cannot know. Language is needed to think about and interpret everything that we experience and edge into perspective - including this essay. Have you ever heard the phrase, "Money makes the world go round?" Well money seems to have great competition; it is essentially language that makes the world go round. Can you imagine how your life would be today without language? It's Impossible. ...read more.