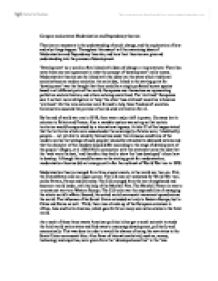 Compare and contrast Modernisation and Dependency theories Theories are necessary in the understanding of social change, and the explanation of how and why things happen. Throughout this essay I will be examining ideas of Modernisation and Dependency theorists, and how their theories can give and understanding into the process of development. 'Development' as a word is often linked with ideas of change or improvement. There has never been any real agreement in what the concept of 'development' really means. Modernisation theories can be linked with the ideas into the ways which traditional societies become modern societies. An early idea, linked to the starting point for 'development' was the thought that there could be a single perfected human species based in all different parts of the world. Europeans saw themselves as representing perfection and civilization, and others as being uncivilized. The 'civilized' Europeans saw it as their moral obligation to 'help' the other 'less civilized' countries to become 'civilized.' On this view colonise were formed to help these 'backward' societies. Colonisation assumed the promise of world-wide civilization for all. By the end of world war one in 1918, there was a major shift in power. Germany lost is colonise to Britain and France. Also a mandate system was set-up so that certain territories would be supervised by a international agency. Article 22 of the league stated that the territories which were ceased under the sovereignty of states were, 'inhabited by peoples... not yet able to stand by themselves under the strenuous conditions of the modern world; the tutelage of such peoples' should be entrusted to advanced nations and that the character of the mandate should differ according to the stage of development of the people.' (Regan, et al :2002:30) In connection with this statement came the idea that the 'west were the best,' and therefore they had to show the 'less developed' others how to develop. ...read more.