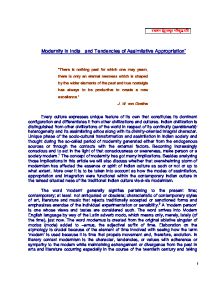 Modernity in India and Tendencies of Assimilative Appropriation

??????? ???? ???????? ???????? ????? Modernity in India and Tendencies of Assimilative Appropriation* "There is nothing past for which one may yearn, there is only an eternal newness which is shaped by the wider elements of the past and true nostalgia has always to be productive to create a new excellence." J. W. von Goethe Every culture expresses unique feature of its own that constitutes its dominant configuration and differentiates it from other civilizations and cultures. Indian civilization is distinguished from other civilizations of the world in respect of its continuity (sanatanata), heterogeneity and its assimilating ethos along with its divinity-oriented integral character. Unique phase of the socio-cultural transformation and assimilation in Indian society and thought during the so-called period of modernity generated either from the endogenous sources or through the contacts with the external factors. Becoming increasingly conscious and to act in the light of that consciousness or awareness, make person or a society modern.1 The concept of modernity has got many implications. Besides analyzing those implications in this article we will also discuss whether that overwhelming storm of modernism has affected the essence or spirit of Indian culture as such or not or up to what extent. More over it is to be taken into account as how the modes of assimilation, appropriation and integration were functional within the contemporary Indian culture in the tensed situated ness of the traditional Indian culture vis-�-vis modernism. The word 'modern' generally signifies pertaining to the present time; contemporary; at least not antiquated or obsolete; characteristic of contemporary styles of art, literature and music that rejects traditionally accepted or sanctioned forms and emphasizes exercise of the individual experimentation or sensibility.2 A 'modern person' is one whose views and tastes are considered such. The word arrives into Modern English language by way of the Latin adverb modo, which means only, merely, lately (of the time), just now. ...read more.

Even the divine revelations are considered by him progressive and continuous.15The existing customs and practices as the outer form of a specific periodic culture have been changed several times in past. Likewise the contents and directives of a tradition also change. As we know, the scriptures along with their readings i.e. their interpretations are the constituent factors in the formation of a tradition. Nevertheless it is also true that a tradition plays greater role in determining the mode of interpretation. Those readings will continue changing for ever, and other interpretive traditions along with their unique beliefs will come forward. Emergence of the modernity is one of the examples. This is one of the foundational facts of the Indian culture, that the primary truth being eternal will be the same throughout all ages, but the secondary truths in the form of directive principles will have an end or at least a destiny of reformation. As time rolls on, more and more of the secondary beliefs or scriptures will go, visionary and leaders will come, and they will modify, sometimes superficially and sometimes radically, and direct society into newer channels, into duties and into paths and ideals that accord with the demands and conditions of the age. Discussions pertaining to culture presuppose identity issues.16 Let me correlate it with the extrinsic and intrinsic elements of Indian culture as a whole. We have here mystical as well as mundane approaches for determining the identity of the individual. Beginning with the intrinsic or foundational ones, (still continued hence called sanatana) the implifications of the mahavakyas: tattvamasi, aham brahmasmi etc. are yet to be explicated and interpreted along the phases of development of traditions. The issue of essential mystical identity begins with the dawn of the creation about which there is an interesting description in the Brhadaranyakopanisad: Verily, in the beginning this was Brahman. It knew itself only as 'I am Brahman.' Therefore it became all. And whoever among the gods became awakened to this- he indeed became that. ...read more.

The concept of assimilative appropriation can only be justified when one accepts some doors remaining always open within the continuity and identity of our culture. This sanction one may find in Murty's conception of culture in general and that of the Indian culture in particular. No culture, including the Great Indian one, is perfect, static, superior and closed. According to him, "---no society so far has developed a culture which is perfect".29 Naturally, there is no use of talking about 'modernity' or any other change in culture as such if the so called great cultures are considered perfect and closed. Murty has assigned much importance to the anthropocentric and environmental factors in modifying and shaping or the culture. He regards culture as a result of 'corporate human effort over generations'. (Ethics.p.4) Murty openly discusses the prospects of assimilating the impacts of other cultures. Let me quote Prof. Vohra: "According to Murty, being "steeped in our own culture" and a "mooring in one's own culture" is a precondition for grasping fully the import of other cultures and "achieving boundless communication with other cultures". For him, an awareness of our own cultural presupposition, on the other hand, and our understanding of a foreign culture, on the other, are reciprocal and interdependent. Our understanding of the beliefs and practices of other cultures is closely linked with our critical consciousness of our own beliefs and practices. It is only by means of the latter that we come to grips and can 'handle' meaningfully the former."30 To finish this discussion rather abruptly I must quote one appropriate statement delivered by Professor K.S.Murty that reflects not only the back ground of the tendency of assimilative appropriation prevalent during the period of the impact of modernity in India but appears to be a symbolic representation of the mood of modernity as such on the one hand and our ancient Vedic wisdom of "a no bhadrah kratavo yantu vishvatah!" (Rig-Veda, I.89.1) on the other: "---rooted in our own tradition we should always keep our horizons open". ...read more.