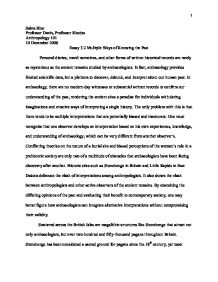 Sabra Bhat Professor Davis, Professor Rhodes Anthropology 101 10 December 2008 Essay 3.2 Multiple Ways of Knowing the Past Personal diaries, travel narratives, and other forms of written historical records are rarely as mysterious as the ancient remains studied by archaeologists. In fact, archaeology provides limited scientific data, but a plethora to discover, debunk, and interpret about our human past. In archaeology, there are no modern-day witnesses or substantial written records to confirm our understanding of the past, rendering the ancient sites a paradise for individuals with daring imaginations and creative ways of interpreting a single history. The only problem with this is that there tends to be multiple interpretations that are potentially biased and inaccurate. One must recognize that one observer develops an interpretation based on his own experiences, knowledge, and understanding of archaeology, which can be very different from another observer's. Conflicting theories on the nature of a burial site and biased perceptions of the women's role in a prehistoric society are only two of a multitude of obstacles that archaeologists have been facing discovery after another. Historic sites such as Stonehenge in Britain and Little Rapids in East Dakota delineate the clash of interpretations among anthropologists. ...read more.

It is important to recognize the benefits from both sides of the argument. The archaeologists, on one hand, believe the ancient remains must be preserved in order to study and cherish it rich history. Pagans, on the other hand, would rather use the ancient remains for the present as a way of paying homage to its past. The upside of providing free access to pagans on solstice is that British citizens are provided with the basic privilege to openly observe religion and especially celebrate traditions rooted in a vibrant history of an ancient and somewhat mysterious people. For archaeologists, however, the benefits of blocking access to Stonehedge are crucial to the preservation of the ancient ruins. Contemporary society can benefit from information that mere scientific data cannot adequately provide- the way a people live, their subsistence patterns, cultural motivations, and how they were structured politically are all important questions that can be answered only when sites have not been modified and tarnished by modern mishaps. I realize that everyone should have the right to practice religion; but if they have the potential to destroy our access to valuable information about human past, then we need to reconsider how we handle archaeological sites. ...read more.

As for investing prehistoric sites where there is no contemporary society to extract information form, feminist archaeology is inclined to being biased and a detriment to formulating more accurate interpretations of the past. Alternative interpretations to conventional archeological understanding should be limited, but not completely ignored. It is imperative that archaeologists integrate the gender topic in their case studies. It is also important that they reconcile differences by making compromises and taking into account people who may perceive the site as not just a valuable discovery for the social sciences, but also a sacred ground for a multitude of contemporary people. We must remember, however, that with no substantial written historical records, it is very easy to interpret the past based on biases derived from our own culture or understanding of other current ones. Archaeologists have the crucial responsibility of not only meticulously protecting and caring for their discoveries, but also making thorough decisions about which interpretations are feasible and which reinforce biases in archaeology. Even though the archaeologist's struggle to provide accurate interpretations could forever persist, it is acquiring the open mind to accept a multitude of interpretation that makes their career so problematic, yet noble. ...read more.