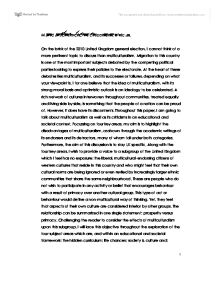 Multiculturalism and its discontents: Discuss.

Multiculturalism and its discontents: Discuss. On the brink of the 2010 United Kingdom general election, I cannot think of a more pertinent topic to discuss than multiculturalism. Migration to this country is one of the most important subjects debated by the competing political parties looking to express their policies to the electorate. At the heart of these debates lies multiculturalism, and its successes or failures, depending on what your viewpoint is. I for one believe that the idea of multiculturalism, with its strong moral basis and optimistic outlook is an ideology to be celebrated. A rich network of cultures interwoven throughout communities, treated equally and living side by side, is something that the people of a nation can be proud of. However, it does have its discontents. Throughout this paper, I am going to talk about multiculturalism as well as its criticisms in an educational and societal context. Focussing on four key areas, my aim is to highlight the disadvantages of multiculturalism, as shown through the academic writings of its endorsers and its detractors, many of whom fall under both categories. Furthermore, the aim of this discussion is to stay UK specific. Along with the four key areas, I wish to provide a voice to a subgroup of the United Kingdom which I feel has no exposure: the liberal, multicultural-endorsing citizens of western cultures that reside in this country and who might feel that their own cultural norms are being ignored or even reviled by increasingly larger ethnic communities that share the same neighbourhood. These are people who do not wish to participate in any activity or belief that encourages behaviour with a result of primacy over another cultural group. This type of act or behaviour would define a non-multicultural way of thinking. Yet, they feel that aspects of their own culture are considered inferior by other groups. The relationship can be summarized in one single statement: prosperity versus primacy. ...read more.

This is a strong example of the disadvantages of multiculturalism. It shows that the incessant labelling of minority groups will have an adverse effect on the majority culture who, will subsequently, feel excluded. With the continuous action of labelling and expectations placed on the cultural identities of groups, the "outcome can be the establishment of a self-fulfilling prophecy, when the false diagnosis influences the self-concept of the learner, who then learns to behave as expected, thus 'verifying' the initial false diagnosis (Walker, 2007, p.367)". Within the boundaries of multiculturalism, self-fulfilling prophecy is a potentially fatal flaw that assists in the creation of substantial divides, economically and socially, between cultural groups. "Multiculturalism has also been repeatedly criticized for its failure to address wider problems of economic and social marginalization. Despite more than adequate legislation to secure equal rights to employment, for example, there remains consistent evidence that unemployment is disproportionately higher in minority communities (Brighton, 2007, p.9)". With the assumption of, what Shane Brighton refers to as "adequate legislation", what then, are the reasons behind the higher levels of unemployment for people from minority communities? The concepts of labelling theory and self-fulfilling prophecy can certainly be recognized as contributing factors. This is where, even within an outer multicultural ideological framework of living, the life chances of some are incomparable to others. "What is important for critics like Sivanandan is to view other cultures from a (sic) objective position. 'Just to learn about other people's cultures is not to learn about the r****m of one's own. To learn about the r****m of one's own culture, on the other hand, is to approach other cultures objectively (Sivanandan 1983:5)'(Hazekamp & Popple, 1997, p.29)". The role of multiculturalism is to celebrate diversity at the same time as creating unity. The sum of its parts, multiculturalism is itself, an individual identity. At the nucleus of multiculturalism is individual identity. So what role does the state have in fostering an equality of identity for all its cultural groups? ...read more.

During the writing of this paper, my current personal circumstances are forcing me to rethink my position on whether multiculturalism is a workable ideology. Throughout my research, I have related to people on all sides of the debate, even some that perhaps I would not have done if this situation had not occurred. I happily live as a minority in my community, which I refer to as home, and have done for several years. I do not believe in just tolerating the customs of other cultural groups. Each group should be able to stand proudly as one of the many entities of this nation and of the world with their own public space, symbols and representations without fear of condemnation or disparagement from anybody. Withholding exact details, at the beginning of April my partner and I, undertaking a very traditional western custom, brought a dog. He is well trained and has absolutely no impact on the lives of my neighbours whatsoever. However, he is a problem for them, because it is not a shared custom from their heritage backgrounds. Needless to say, things are a little uncomfortable and we now have to move out of the neighbourhood that we refer to as home. This is exactly the type of situation that denouncers of multiculturalism would point to in their arguments against. Would they be aware of it though? I seek no reprisal. I am not about to change my political views and align myself with a far right wing way of thinking. All I am going to do is pack our things and move east and become one of the statistical figures that engage in "white flight". That is all. During the introduction, along with considering the effects of multiculturalism upon the liberal-thinking, multicultural-endorsing western citizens, I asked you to reflect on six themes: integration; assimilation; prosperity; primacy; tolerance; and superiority. Now then, I bring this to you, after all you have read and whether you agree with the idea or not, do you think multiculturalism is working? Word count: 3388. ...read more.