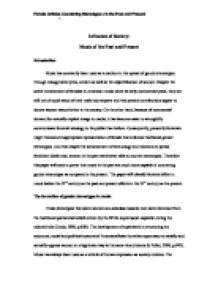 Music has constantly been used as a medium in the spread of gender stereotypes through misogynistic lyrics, sexism as well as the objectification of women. Despite the active involvement of females in American music since its early commercial years, they

Influence of Society: Music of the Past and Present Introduction Music has constantly been used as a medium in the spread of gender stereotypes through misogynistic lyrics, sexism as well as the objectification of women. Despite the active involvement of females in American music since its early commercial years, they are still not of equal status of their male counterparts and that present contributions appear to denote women status further in the society. On the other hand, because of commercial demand for s******y explicit image in media, it has become easier to wrongfully communicate feminist ideology to the public than before. Consequently, presently feminists might transcend inappropriate representation of female that enforces traditional gender stereotypes. And that despite the advancement of technology and mediums to spread feminism ideals now, women in the past were better able to counter stereotypes. Therefore this paper will seek to prove that music in the past are much more capable in countering gender stereotypes as compared to the present. The paper will classify feminist effort in music before the 21st century as the past and present efforts in the 21st century as the present. The formation of gender stereotypes in music These stereotypes that deem women as a subclass towards men were stemmed from the traditional patriarchal beliefs driven by the White supremacist capitalist during the colonial rule (Linda, 1993, p.639). ...read more.

In the past, Queen Latifah's and her back-up dancers were more conservatively dressed in their videos. Thus, the message that Queen Latifah was trying to send across was more explicitly clear. By dressing conservatively, audiences can pay attention to the message conveyed by the song without being distracted by s****l innuendoes. In saying this, Queen Latifah did not portray herself and back-up dancers as s****l objects. Not only did she do that, she also used the military dress to exude an aura of dominance over her male counterparts without having to resort to dressing scantily. As compared to the present, influential female artistes like Lady Gaga dressed outrageously and often involves themes of bondage in their songs and videos. In Lady Gaga's "Alejandro", Lady Gaga is seen engaging in sadism and masochism imagery showing the need for love and satisfaction. Britney Spears, another female artist icon of the present, uses s*x as the primary driving force behind most of her work. One such example is the music video of "Womanizer" where she bared her upper body as shown in parts of the video and was also seen grinding other men. While it may be true that the female artistes may have intended to s******y empower their female audiences to take charge of their lives or aim ...read more.