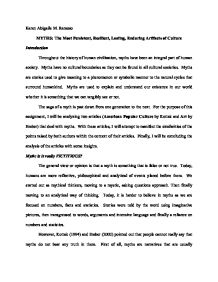 MYTHS: The Most Persistent, Resilient, Lasting, Enduring Artifacts of Culture

Karen Abigaile M. Ramoso MYTHS: The Most Persistent, Resilient, Lasting, Enduring Artifacts of Culture Introduction Throughout the history of human civilization, myths have been an integral part of human society. Myths have no cultural boundaries as they can be found in all cultural societies. Myths are stories used to give meaning to a phenomenon or symbolic manner to the natural cycles that surround humankind. Myths are used to explain and understand our existence in our world whether it is something that we can tangibly see or not. The saga of a myth is past down from one generation to the next. For the purpose of this assignment, I will be analyzing two articles (American Popular Culture by Kottak and Art by Ember) that deal with myths. With these articles, I will attempt to manifest the similarities of the points raised by both authors within the context of their articles. Finally, I will be concluding the analysis of the articles with some insights. ...read more.

Hence, people cannot argue with what that certain society feels even if they think otherwise. If they do so, they are being ethnocentric. Myth: Is it just another term for RELIGION? Using the sociological perspective, it can be proven (using the 2 articles) that indeed, the word "myth" can actually be another term for religion or that both words mean the same thing. As Ember (2002) puts it, religion is a product of the human need for explanation about events that cannot be comprehended (such as dream and death). Kottak gave the example of story of Adam and Eve regarding how religion explains why humans came into existence. Another aspect of how myth and religion can mean the same thing is by looking at the characters in mythical and religious stories. According to Kottak, the central characters in myths need not be unreal, superhuman, or physically immortal. Their names usually depict the origin of their identity. Commonly, they are accompanied by secondary characters who personify the virtues needed to succeed in their quest. ...read more.

In the Philippine setting, myths also use the theme of binary opposition. An example is the myth, Mga Esposang Bituin. Basically, it is an explanation of why there are mestizos and mestizas in the country (the common men married goddesses). In the myth, the "naghaharing-uri" (or the esposas) is in conflict with the women of Batan because the husbands of these women want to leave them and marry the beautiful goddesses who arrive during the night to bathe at the waters of Batan. Moreover, the universal themes that were given by Ember are also present in the myth such as catastrophe (the livelihood of the people were destroyed when the esposas come and bathe near the area where they plant their food) and sibling rivalry (the men fight to have the prettiest esposa). Conclusion A myth is very practical. It is not a dead, dry, formal, outward form, and show, but divine, living, vital, dynamic, liberating. It is a living tradition: it has survived alien influences, serves as the record of deepest cultures, and it is the dark spring from which flows the offspring - a new culture, a new world. ...read more.