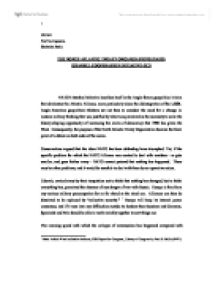 Nato's Istanbul Cooperation Initiative. NATOs Istanbul Initiative inscribes itself in the Anglo-Saxon geopolitical vision that dominates the Atlantic Alliance, more particularly since the disintegration of the USSR.

HS 263 Prof De Caprariis Shubailat Badis THE NORTH ATLANTIC TREATY ORGANIZATION'S (NATO) ISTANBUL COOPERATION INITIATIVE (ICI) NATO's Istanbul Initiative inscribes itself in the Anglo-Saxon geopolitical vision that dominates the Atlantic Alliance, more particularly since the disintegration of the USSR. Anglo-American geopolitical thinkers set out then to consider the need for a change in western military thinking that was justified by what was perceived as the necessity to seize the history-shaping opportunity of increasing the realm of democracy that 1990 has given the West. Consequently, the purpose of the North Atlantic Treaty Organization became the focal point of a debate on both sides of the ocean. Conservatives argued that the ideas NATO has been defending have triumphed. Yet, if the specific problem for which the NATO Alliance was created to deal with vanishes - or gets smaller, and goes farther away - NATO cannot pretend that nothing has happened. There may be other problems, and it would be sensible to deal with them by co-operative action. Liberals, carried away by their temptation not to think that nothing has changed, but to think everything has, perceived the absence of any danger of war with Russia. Europe is free from any serious military preoccupation for as far ahead as the mind can. Alliances can then be dissolved to be replaced by "collective security." 1 Europe will keep its internal peace consensus, and if it runs into any difficulties outside its borders then Russians and Germans, Spaniards and Pole should be able to work amiably together to sort things out. The amazing speed with which the collapse of communism has happened compared with events of similar size in the past - the demolition of the Roman Catholic Church's control over Christianity, the erosion of the absolute powers of kings - tended to freeze the mind in disbelief, or to let it be swept by hallucination: whence the conservatives' failure of imagination and the liberals' lack of intellectual rigor. ...read more.

3. The right to re-draw the map of the world as attested to by the "Greater Middle East Initiative."9 This US messianic vision will last a long time, with allies being more or less consulted. The individualism, moralism and exceptionalism that impregnates American elites as well as public opinions explains the consensual sentiment that no one has the right to put into question the purity of their intentions, nor the correctness of their definitions of the Good and the Evil. It is in this sense of exceptional character that is found the origin of the strategic slide from dissuasion to preemption, which falls within the logic of unleashing wars. Moreover, the constant pragmatic stand of all leaders at the head of the White House to express unconditional solidarity with Israel makes the achievement of a durable peace in the Middle East uncertain - the Arab Peace Plan being one of its victims. As far as the Muslim world is concerned, most American political speeches include a reference to Islamic-fascism as if Islam had the exclusivity of violence and radicalism. Lastly, whatever their political inclination, US strategists: 1. have a predilection for the over dimensionality of the military tool and the use of force; 2. do not envisage something other than an American leadership of the security of the world. This moral right is based on the principle of military superiority: technological supremacy and fire power will lead the adversary to defeat. The limits of this path in Afghanistan and Iraq have not even led to a critical reflection but rather to the new strategy of "prompt global strike" that would allow an attack on any given point on the globe with conventional missiles within less than an hour - a new version of air supremacy without risks on the ground. 3. list their enemies into four main categories: a. "peer competitors" who constitute rivals to their leadership (China and Russia); b. ...read more.

present involvement in Middle Eastern security remains modest indeed. The idea was rejected by Gerhard Schr�der, Germany's chancellor, who opposed any use of NATO troops in Iraq. Although 16 of the organization's 26 members had then soldiers there, they contributed them as individuals, not part of NATO. The Bush administration has since admitted that the 135,000 troops American troops will have to stay there for the foreseeable future. Pushing through the ICI was then an attempt to make European NATO members feel involved in the security of the Gulf - a sentiment that might contribute to America's exit strategy from the Iraqi quagmire. The initiative, it is hoped, could yield symbolic results. Yet the reality of SSR experiments in the Broader Middle East has laid bare a significant gap between policy commitment and actual implementation. Promoting the development of effective defense institutions that are under civilian and democratic control, and are capable of cooperating with NATO forces if the need arises, denies the historical fact that phases of durable peace are linked to balance of powers and not the to the development or fall of democracies in the world. Ultimately, the construction of an international multilateral security through a "collective role"23must take into consideration the legitimate rights of everyone and not solely the right of western powers to manage the security of the region and the planet as well. The Gulf countries that have joined the initiative most likely think that they are accepting an offer they cannot refuse in the current political climate since it explicitly excludes the eventual prize of NATO membership. Yet, they speculate that the ICI will be kept at the level of an interesting dialogue without the need to enact reforms that would be costly in political capital. The initiative is unlikely to contribute to the enhancement of Gulf security. Decisions in this regard will be taken by American officials in bilateral consultations with the respective governments as has been done in the past. ...read more.