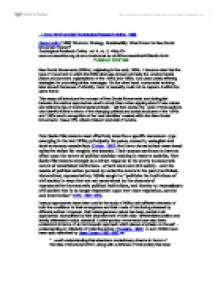 ../../copy.htmlCopyright Sociological Research Online, 1999 Alana Lentin (1999) 'Structure, Strategy, Sustainability: What Future for New Social Movement Theory?' Sociological Research Online, vol. 4, no. 3, <http://0-www.socresonline.org.uk.emu.londonmet.ac.uk:80/socresonline/4/3/lentin.html> Published: 30/9/1999 New Social Movements (NSMs), originating in the early 1980s. It became clear that the type of movement to which the NSM label was pinned, primarily the environmental, peace and women's organisations of the 1970s and 1980s, now used widely differing strategies for promoting similar messages. On the other hand, movements evolving later around the issues of ethnicity, 'race' or sexuality could not be captured within the same frame. This essay will introduce the concept of New Social Movements and distinguish between the various approaches used to study them when arguing about if new values are behind te rise of environmental protests. I will then review the work of three authors who identify NSMs in terms of the changing political and social structures of the 1970s and 1980s and in recognition of the 'new identities' created within the New Social Movements: Claus Offe, Alberto Melucci and Alain Touraine. New Social Movements most effectively describe a specific movement-type emerging in the late 1970s; principally the peace, women's, ecological and local-autonomy associations (Cohen, 1985) that have characterised mass-based collective action for roughly two decades. Their success continues to have an effect upon the nature of political decision-making in western societies. New Social Movements emerged as a direct response to the overly bureaucratic nature of established institutions - of both state and civil society - and the modes of political action pursued by collective actors in the past (routinised, hierarchical, representative). NSMs sought to "politicize the institutions of civil society in ways that are not constrained by the channels of representative-bureaucratic political institutions, and thereby to reconstitute a civil society that is no longer dependent upon ever more regulation, control and intervention" (Offe, 1985: 820). Various approaches have been used in the study of NSMs with different elements of both the conditions for their emergence and their mode of functioning stressed by different authors. ...read more.

Whilst Offe generally ignores it and Melucci tends to embrace it, Touraine has difficulty in attributing collective struggles in the domain of culture to the Subject as social movement. Therefore, while identity remains key, as it does for all three, Touraine's conceptualisation of this identity remains entangled with the notion of the subject as individual. So, "the individual asserts him or herself as a subject by combining desire with empathy, without surrendering the temptation to identify one with the other, as that would reduce the I to the Ego, which is effectively its antithesis" (Touraine, 1995: 223). Thus, the 'Subject as social movement', or the struggle to "transform the relation of social domination that are applied to the principal cultural resources" (Touraine, 1984: 64) is a commitment or responsibility that enables the Subject to surpass her tendencies to egoism. 4.13 Such claims are consistent with Touraine's resistance to the argument that supports the increased individualism of contemporary society and the hegemony of consumerism. Although he does not negate such claims, he proposes a collective ability to resist the advent of a totalising individualism: "The modern world...increasingly abounds with references to a Subject. That Subject is freedom, and the criterion of the good is the individual's ability to control his or her actions and situation, to see and experience modes of behaviour as components in a personal life history, to see himself or herself as an actor. The Subject is an individual's will to act and to be recognised as an actor" (Touraine, 1995: 207) 4.14 Unlike Melucci's proposal of the possibility for social action in the spaces of diffused, yet uneven power, Touraine's equation of the Subject and alternative modernity with the choices of the individual to act de-emphasises the role of power in collective struggles. He sees as a "perversion" (Touraine, 1995: 210) Foucault's (c.f. 1988) view that subjectivation (the engendering of the Subject) ...read more.

My interest in the field arises from my own experiences as an anti-racist activist and became academically honed when writing my Masters dissertation, Effective anti-racist strategies: new social movements as a potential for renewed ethnic mobilisation, London School of Economics and Political Science, September 1997. On the basis of my current research, I presented a paper at the 34th World Congress of the International Institute of Sociology, Tel Aviv, July 1999 entitled 'Race', Racisms, Anti-Racisms. 2The Council of Europe ran a European Youth Campaign against racism, xenophobia, antisemitism and intolerance (1994-1996). The European Union designated 1997 as the European Year against Racism. 3Resource Mobilisation theory does not seek to specifically explain the novelty of contemporary collective action although it has been used to do so. Melucci (1985: 109) points out that "the notion of 'novelty' was first used to indicate the weakness of the existing theories of collective action, if applied to the emerging phenomena, and to stress the need for a more comprehensive framework. It was also a temporary critical tool for addressing the shortcomings of resource mobilization theory." 4For discussions of Resource Mobilisation, see McCarthy and Zald (1977) or Tilly (1978). For an analysis of the debate comparing Resource Mobilisation and Identity-Oriented approaches, see Cohen (1985) or Dalton (1994). 5Here, it is important to distinguish between the types of movement that Offe sees as having particularist interests (largely, reading from his analysis, local-autonomy or women's groups) and the types of movement characterised by the term 'identity politics'. This is a later phenomenon, at least in Europe (it emerged earlier and has more prominence in the Unites States) and refers mostly to associations organised around ethnicity, nationality, colour, religion, sexuality and disability. 6Touraine, A. (1997). 7Indeed, Touraine's work on social movements in the 1980s concentrated on the domain of the factory (industrial struggles) and that of political liberation movements, principally Solidarity in Poland (anti-totalitarian, nationalist struggles). The relative homogeneity inherent in the composition of his research objects problematises his continued insistence on social movement/Subject primacy in his more recent work on democracy and multiculturalism. ...read more.