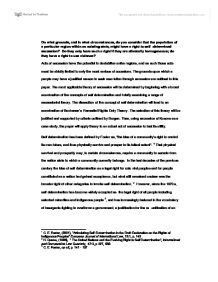 On what grounds, and in what circumstances, do you consider that the population of a particular region within an existing state, might have a right to self-determined secession? Do they only have such a right if they are ethnically homogeneous; do they h

On what grounds, and in what circumstances, do you consider that the population of a particular region within an existing state, might have a right to self-determined secession? Do they only have such a right if they are ethnically homogeneous; do they have a right to use violence? Acts of secession have the potential to destabilise entire regions, and as such those acts must be strictly limited to only the most serious of occasions. The grounds upon which a people may have a justified reason to seek resolution through secession are outlined in this paper. The most applicable theory of secession will be determined by beginning with a broad examination of the concepts of self determination and briefly examining a range of secessionist theory. The dissection of the concept of self determination will lead to an examination of Buchanan's Remedial Rights Only Theory. The selection of this theory will be justified and supported by criteria outlined by Borgen. Then, using secession of Kosovo as a case study, the paper will apply theory to an actual act of secession to test its utility. Self determination has been defined by Foster as, "the idea of a community's right to control its own future, and thus physically survive and prosper to its fullest extent".1 That physical survival and prosperity may, in certain circumstances, require a community to secede from the nation state to which a community currently belongs. In the last decades of the previous century the idea of self determination as a legal right for colonial peoples and for people constituted as a nation had gained acceptance, but what still remained unclear was the broader right of other categories to invoke self determination.2 However, since the 1970s, self determination has become widely accepted as the legal right of all people including selected minorities and indigenous people3, and has increasingly featured in the vocabulary of insurgents fighting to overthrow a government, a justification for the re-unification of an area considered by a community to be a nation and as justification for the secession of a place of territory. ...read more.

23 Remedial right only theory has a genesis in Locke's theory of revolution, the simplified version of which is that if the state commits injustices against the people, the people have a legitimate right to rise up and fight those injustices. The suitability of remedial right only theory and its justification of secession lies in the fact that secession may in fact be far less painful to a state and its region than a prolonged revolution.24 Remedial right only positions people to secede from, an unjust state, it is not the broad mandate to secede at will from a state that is not unjust. As such it provides the ideal justification for secession. There is an underlying moral imperative to both Borgen and Buchanan's ideas; secession as self defence, in response to massive violations, to injustice, not to the social needs of a comfortable and stable middle class. Ideas that justify the idea that a people will in specific circumstances have the right to secede. That act of secession, in the face of violence and injustice, may require comparative violence on the part of the secessionists. Buchanan's remedial right only theory concludes that if a group has a remedial right to secede then the hoist state has already lost the right to control the territory claimed by the group. This theory associates the right to control a territory with the right to utilise force to defend it. This right is predication on the fact that as the host state has lost any right to force, the only group with any right is that group which now controls that territory, the secessionists. 25 This right to use force can be extended, according to Buchannan's remedial right only theory, to the host state or any other group or organisation that challenges the groups right to control territory. 26 This paper will use a case study to provide further explication of the utility the justifications outlined above. ...read more.

Conversely the secessionist group has won the right to utilise force to defend itself against the host states actions and the actions of any other organisation or group. Under Buchanan's Remedial Rights Only Theory the preservation of autonomy can be managed through the application of violence. 40 In the case of Kosovo, once the Serbian forces had lost control of sections of Albania, and once the KLA was in effective control of the territory, operating under a mandate from the Albanian people and supported by the international community, they won the right to use violence to defend their newly won territory. The secession of Kosovo can be seen, in the liberal context, as a case of right vs. wrong. Serbia had acted with a lack of restraint in terms of its targeting of civilians. While the Kosovo Liberal Army is not without blame, the Kosovo secessionists can be seen to be justified in countering the acts of violence committed against them by using violence itself. 41 When a population of a particular region can be considered a people, in the ethnographic sense, then the right to self determination should be available. If a minority, ethnically, religiously or politically homogenous, is not sufficiently a permitted to protect its culture and see it flourish then internal self determination is not sufficient and an act of external self determination or secession is justified. As these acts of secession can fracture the region, they must be enacted only under the strictest of criteria. Those outlined by Borgen and Buchanan represent the most useful theories. Acting in self defence, under direct threat, and when other alternatives are unavailable, then secession becomes justified. Within Remedial Rights Only Theory rests the justification to utilise violence as part of the self defence. Ultimately acts of secession must be limited to cases where a people are under direct threat and secession represents the best solution. By removing them from the host state they gain an internationally recognised border, the support of international institutions to defend that border and provide a safe haven for their culture to flourish. ...read more.