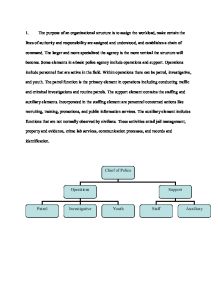 Organisational structure of a Police Force.

1. The purpose of an organizational structure is to assign the workload, make certain the lines of authority and responsibility are assigned and understood, and establishes a chain of command. The larger and more specialized the agency is the more vertical the structure will become. Some elements in a basic police agency include operations and support. Operations include personnel that are active in the field. Within operations there can be patrol, investigative, and youth. The patrol function is the primary element in operations including conducting traffic and criminal investigations and routine patrols. The support element contains the staffing and auxiliary elements. Incorporated in the staffing element are personnel concerned actions like recruiting, training, promotions, and public information services. The auxiliary element includes functions that are not normally observed by civilians. These activities entail jail management, property and evidence, crime lab services, communication processes, and records and identification. 2. The role a police executive has is to deal with managerial concerns. The two primary police executives are the police chief and the county sheriff. The sheriff is responsible for maintaining and operating the county correctional facilities, serving civil processes and duties, collecting certain taxes, and occasionally serving as a bailiff. ...read more.

I agree with the need for the police executives to have a constant presence, but I don't think their time is used wisely dealing with staff disputes and minor issues. The Mintzberg model seems to outline the roles well and for most of the roles and functions depicted I agree can only be completed by a police executive. I don't believe that police executives should be dealing with department issues unless it's critical for them to step in. It should be the officers within the office and the supervisors' job to control subordinates. 4. The New York City Compstat is a database collecting system. It is not a software or computer system. It is used to develop weekly crime statistics to monitor new crime trends. Compstat was intended to map and identify problems. Weekly reports are developed in each precinct, and meetings are held with the highest ranking officers in the New York Police Department in attendance. Compstat analyzes and identifies crimes trend that are occurring. At the weekly meetings the officers decide on the measures needed to be taken in order to best deal with the crime pattern. I believe this program is a fantastic idea. ...read more.

This is followed by a personal interview where your appearance, ability to communicate, and general pose is scrutinized. Next, the character investigation which is where a detailed background check is completed. Once the character investigation is complete it is time to undergo the polygraph test. This is an important step, for it will determine the honesty of the recruit and secure higher qualified officers. Then there is the medical exam and drug screening, which will test for any unknown substances and determine if the recruit is physically able to deal with the stress and activities of an officer. Some departments use an assessment center as the next step in the hurdle process. This is usually only used when selecting a police executive. It can include a range of activities including psychological, management tasks, group discussions, written communication, and role playing scenarios. The next step is entry into the police academy. This is a vital part of the hiring process. There are many academies able to be attended. Some departments run their own and some colleges offer police training. After completion of the academy the recruit will become a sworn officer. Finishing the academy does not make the recruit an official officer. Next they are assigned a field training officer and are put on a probationary period, which lasts from six months to a year. If during this probationary period their performance is unsatisfactory termination is immediate. ...read more.