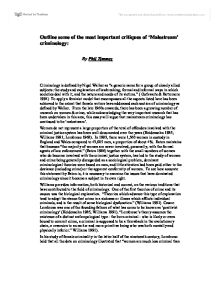 Outline some of the most important critiques of 'Malestream' criminology.

Outline some of the most important critiques of 'Malestream' criminology: By Phil Timmes Criminology is defined by Nigel Walker as "a generic name for a group of closely allied subjects: the study and explanation of lawbreaking; formal and informal ways in which societies deal with it; and the nature and needs of its victims." ( Outhwaite & Bottomore 1994) To apply a feminist model that encompasses all the aspects listed here has been achieved to the extent that female writers have addressed each section of criminology as defined by Walker. From the late 1960s onwards, there has been a growing number of research on women & crime, while acknowledging the very important research that has been undertaken in this area, this essay will argue that mainstream criminology has continued to be 'malestream'. Women do not represent a large proportion of the total of offenders involved with the criminal justice system has been well documented over the years (Heidensohn 1985; Williams 1991; Lombroso 1968). In 1993, there were 1,560 women in custody in England and Wales compared to 43,005 men, a proportion of about 4%. Eaton maintains that because "the majority of women are never involved, personally, with the formal agents of law enforcement." (Eaton 1986) ...read more.

Explanations of female crimes have usually been given in terms of the failure of individual women to adapt themselves to their supposedly natural biological and/or socio- sexual destinies. The implication has repeatedly been that it is the individual women who should change - rather than the social formations, which impose restrictive and exploitative roles upon all women. As a result, criminal women have always been presented as being 'Other'. Women, after all, experience the same deprivations; family structures and so on that men do. Theories of crime should be able to take account of both men's and women's behaviour and to highlight those factors which operate differently on men and women. Whether or not a particular theory helps us to understand women's crime better is of fundamental, not marginal importance for criminology." (Gelsthorpe & Morris 1988) Carlen, in her book, confronts the myth that women who break the law "rather than being serious and intentional criminals, are nothing more than deviants from what are supposed to be their natural, biologically-determined socio-sexual roles and destinies." (Carlen 1985; Kennedy 1992). A 'criminal woman', then, is considered to be a worse character than a 'criminal man' as she has not only broken the law of the land, but also broken the unwritten law of what is right and proper behaviour for a woman. ...read more.