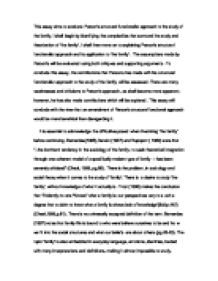 Parson's structural functionalism and the family

This essay aims to evaluate Parson's structural functionalist approach to the study of the family. I shall begin by identifying the complexities that surround the study and theorization of 'the family'. I shall then move on to explaining Parson's structural functionalist approach and its application to 'the family'. The assumptions made by Parson's will be evaluated using both critiques and supporting arguments. To conclude this essay, the contributions that Parsons has made with his structural functionalist approach to the study of the family will be assessed. There are many weaknesses and criticisms to Parson's approach, as shall become more apparent; however, he has also made contributions which will be explored. This essay will conclude with the view that an amendment of Parson's structural functional approach would be more beneficial than disregarding it. It is essential to acknowledge the difficulties posed when theorizing 'the family' before continuing. Bernardes(1985),Denzin (1987) and Rapoport (1989) state that "..the dominant tendency in the sociology of the family- to seek theoretical integration through one coherent model of a specifically modern type of family - has been severely criticised" (Cheal, 1999, pg.56). There is the problem, in sociology and social theory when it comes to the study of 'family'. There is a desire to study 'the family', without knowledge of what it actually is. Trost (1990) makes the conclusion that 'Evidently no one "Knows" what a family is: our perspectives vary to such a degree that to claim to know what a family is shows lack of knowledge'(ibid:p.442) (Cheal,1999,p.61). There is no universally accepted definition of the term. Bernardes (1997) notes that family life is bound to who were believe ourselves to be and how we fit into the social structures and what our beliefs are about others (pg.28-29). The topic 'family' is also embedded in everyday language, emotions, identities, loaded with many interpretations and definitions, making it almost impossible to study. ...read more.

If one's family does not fit the criteria of the nuclear family, then this suggests that their children will not be socialised into the norms and values of society properly and will therefore not contributes positively to society. This is however incorrect, there are numerous individuals that have been brought up in families that are not nuclear and have become successful and beneficial contributions to society an example would be Steve jobs, not only was he not brought up by his biological parents, and from a poor background which according to Parson's is a cause of 'disorganization', he also dropped out of college, which is the opposition to the norm. He turned out to be the inventor of the iphone. Moreover , it is not necessarily the case that children that have been brought up in nuclear families always contribute positively to society either, or that all of the parents in a nuclear family are socialised themselves into the norms and values of society to be able to socialise their children. Another assumption that Parsons makes is that 'the family' is a functional, positive and beneficial institution. Bernardes (1997) also argues that these traditional models of the family, including Parson's structural functionalist approach, 'omit reference to stress, strain and abuse as part of everyday family lives' (Bernardes,1997,pg.29). He acknowledges that those family lives which do not fit the criteria of a nuclear family are seen as 'problems' when in some cases, divorce and single-parenthood could actually be a solution to an unbearable state of affairs(Bernardes,1997,pg.29). Bernardes (1997) allows us to see that the nuclear family model is problematic due to inflexibility and inability to encompass other family forms and also that not all nuclear families are functional as perceived and that the dysfunctional aspects of nuclear families are hidden away from public view, this 'false idol' of the nuclear family puts a strain on relations. ...read more.

This is a huge contribution that Parson's structural functionalist approach has had to the study of family. Furthermore, Parson's attempt to group and categorise in his structural functionalist approach, according to Bernardes(1997) is also still a popular approach to theorising(pg.38). There are specific reasons for the criticisms received by Parsons and these have much to do with his approach's limitation to the time period and inflexibility. It was due to its inability to explain social change that it was eventually disregarded. However, If Parson's structural functionalist approach was to be modified to encompass the diverse and complex family forms of contemporary society, it could be very beneficial. Moreover, Carrington (2002) argues that "Family is represented as both the source of all social problems and their solutions" (pg.4). This can be related to the ways in which 'the family' is discussed in the political sphere today about societal breakdown being directly linked to single parenthood, divorce and teenage pregnancy being viewed as destructive and problematic. A revert back to the traditional nuclear family form is the solution that seems to be subtly proposed. Parson's contributes by providing a logical and objective outlook to an extremely subjective and complex topic. With modifications to fit changes in contemporary society, the knowledge obtained through this approach could be invaluable. To conclude this essay I would like to re-iterate the difficulty in studying 'the family' from any theoretical angle. Parson's made a bold move, by creating a 'model' of 'the family'. Despite the weaknesses, this model is still used today as a standard against which other family forms are measured. However, overall, Parson's structural functionalist approach was subject to much criticism due to its limitations in explaining social change and diversity in contemporary society. Parsons approach was limited to the early post-industrial period, with no scope for future changes in family forms. Due to its contributions to the sociological study of 'the family', however, it would be advantageous for the structural functional approach to be modified, encompassing diversity in its model of 'the family' and also accounting for change, in order to be applied to contemporary society. ...read more.