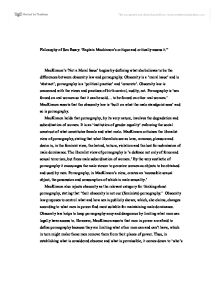 Philosophy of Sex Essay: 'Explain Mackinnon's critique and critically assess it." MacKinnon's 'Not a Moral Issue' begins by defining what she believes to be the differences between obscenity law and pornography. Obscenity is a 'moral issue' and is 'abstract'; pornography is a 'political practise' and 'concrete'. Obscenity law is concerned with the views and practises of birth control, nudity, ect. Pornography is 'sex forced on real women so that it can be sold... to be forced on other real women.' MacKinnon asserts that the obscenity law is 'built on what the male standpoint sees' and so is pornography. MacKinnon holds that pornography, by its very nature, involves the degradation and subordination of women. It is an 'institution of gender equality' enforcing the social construct of what constitutes female and what male. MacKinnon criticises the liberalist view of pornography, stating that what liberalists see as love, romance, pleasure and desire is, in the feminist view, the hatred, torture, violation and the lust for submission of male dominance. ...read more.

system that can afford to be sacrificed to maintain' it? MacKinnon goes on to say that she thinks that whatever is considered obscene is what doesn't turn the Supreme Court on, or what revolts them more, or makes them see themselves as a potential targets of sexual aggression. That what is obscene is whatever gets those men, those in power can afford to ignore, all hot and heavy. 'So anything can be done to a woman, but obscenity is sex that makes male sexuality look bad.' Mackinnon claims that under the First Amendment, most pornography is protected; that men's 'right to inflict pornography upon women in private...is protected.' She also states that it supports pornography, 'believing that consensus and progress are facilitated by allowing all views.' MacKinnon declares that, whilst others may claim that allowing freedom of 'speech', including pornography, frees the mind to fulfil itself; pornography, in fact, enslaves women and normalises the terror that enforces women's silence. She claims that under First Amendment logic the harm that pornography causes cannot be recognised, because it doesn't occur in a linear fashion. ...read more.

Should such texts and other things that MacKinnon's definition may pertain to, like beauty contests, be banned or controlled? Finally, it is hardly true that women are forced to silence by sexual practises. Whilst women's sexuality may not be quite as openly accepted and applauded in society, it is not as grimly denied and repulsed as MacKinnon seems to think, and has little affect on their rights to equality and free speech. However it must be pointed out in her defence that her critique 'Not a Moral Issue' was presented in 1983. In conclusion MacKinnon seems to over rate the effect of pornography on the everyday social structure and the harm that it causes. Her assumption that it sets the standards for all sexual acts and gender roles is over generalised, neglecting the fact many do not view pornography as a realistic portrayal of gender roles or the sexuality of gender. In the end pornography may not be promoting women's rights to equality, but it is hardly as damaging as she claims. Reference: C. MacKinnon, 'Not a Moral Issue' from Feminism Unmodified, Cambridge, Mass.: Harvard University Press, 1987. pp. 146-162. Est 1000 words ...read more.