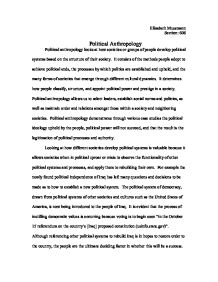 Elizabeth Mussmann Section: 606 Political Anthropology Political anthropology looks at how societies or groups of people develop political systems based on the structure of their society. It consists of the methods people adopt to achieve political ends, the processes by which politics are established and upheld, and the many forms of societies that emerge through different cultural dynamics. It determines how people classify, structure, and appoint political power and prestige in a society. Political anthropology allows us to select leaders, establish social norms and policies, as well as maintain order and relations amongst those within a society and neighboring societies. Political anthropology demonstrates through various case studies the political ideology upheld by the people, political power will not succeed, and that the result is the legitimation of political processes and authority. ...read more.

It is evident that the process of instilling democratic values is occurring because voting is to begin soon "in the October 15 referendum on the country's [Iraq] proposed constitution (usinfo.state.gov)". Although referencing other political systems to rebuild Iraq is in hopes to restore order to the country, the people are the ultimate deciding factor in whether this will be a success. The people ultimately legitimize the power given to the government, and doubt is shining through with the various attacks and suicide bombings occurring in protest of this rebuilding. Whether the referendum passes in Iraq it will be interesting to find out and see whether pulling ideas of political systems from others will work in the case of Iraq. Even if the referendum does pass it is still up to the people to uphold and accept. ...read more.

More Americans than at any time since he took office think he does not share their priorities (cbsnews.com)." This exemplifies how political anthropology has many processes in how decisions and leadership are determined and that without the support of the people, this power is not legitimate. The people are speaking out about how the feel towards our current political authorities and will have an influence on future decisions. Further more the American political system allows for us to change the political authority every 4 years during elections and influence the political processes. Political anthropology gives insight as to how societies differentiate socially, develop political organization, and maintain power and social control. I believe that the most important aspect of political anthropology is the people and their shared values and beliefs that legitimize the distribution and uses of power and authority. ...read more.