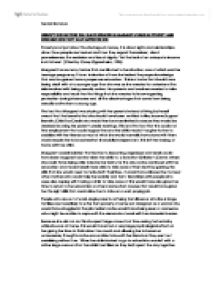 Poverty- idantify the factors that have resulted in Margaret living in poverty and describe how they have affected her.

IDENTIFY THE FACTORS THAT HAVE RESULTED IN MAGARET LIVING IN POVERTY AND DESCRIBE HOW THEY HAVE AFFECTED HER Poverty is not just about the shortage of money. It is about rights and relationships; about how people are treated and how they regard themselves; about powerlessness, the exclusion and loss of dignity. Yet the lack of an adequate income is at its heart. (Cited by: Carey Oppenheim, 1996) Margaret has so many factors that contributed to her situation, one of which was her teenage pregnancy. It is an indication of how she lacked the proper knowledge that can be gained from a proper sex education. This is a factor that should have being dealt with at a younger age than she was as she needed to understand the risks involved with being sexually active. Her parents and teachers needed to take responsibility and teach her the things that she needed to know regarding protection during intercourse and all the disadvantages that come from being sexually active from a young age. The fact that Margaret was staying with her parents instead of living by herself meant that the benefits that she should have been entitled to like, income Support Benefits, Child Tax Credits etc would then be more limited because they would be assessed by using her parent's yearly earnings. ...read more.

When her child started to go to school she was left with a rather large vacuum that her child had filled as they both spent the day together. This vacuum led to her starting to feel lonely then her loneliness led to her depression and her being prescribed anti-depressants. Another factor that led to her ending up depressed was the fact that she was unable to complete her education this meant that she was unable to continue onto college with her friends who continued with their education and managed to get the necessary skills to get employment. Although, she had had skills of looking after children and working in a shop that was not going to be enough for her as she needed the qualifications to solve her employment problem. She said that she had skills in child care and shop keeping, she could have taken vocational courses in child care that would allow her to work in a child care centre where she would have being able to put her knowledge and skills to good use. She also should have registered her child to a nursery, for an example Sure Start, whereby she was going to meet new friends. ...read more.

The connections office could have helped her to continue her education when she was able. In conclusion is clear that Margaret suffered from a type of poverty that left her unable to see herself going further in life than taking care of her child, her own image of herself and her own summation of her abilities would have left her with the belief that she is unable to find work or progress in her education, displayed by her admitting that she finds herself nervous whenever she has to go to a job interview. The fact that she was excluded socially and found herself with a diminishing number of friends from what she was used to at her young age would have left her feeling lonely which led to her depression. Book Review Introductory Sociology 4th Edition 2002 - Bilton T, Bonnet K, Jones P, Lawson T, Skinner D, Stanworth M & Webster A This is a book that I have used previously in my Access course and I find it very useful with clear understandable English. The book is written in a way that makes reading it and understanding the concepts and definitions in it very simple. I found quite a lot of information regarding Margaret's situation in this book and it was very helpful in my doing this assignment. ...read more.

This essay looks at the various things that can impact on someone's experience of poverty. There was some good insight shown regarding the effects of finances and social support; but be careful not to make generalisations such as the comment regarding lack of sex education.

The writing style is good overall. Remember to reference books and websites correctly.
4/5