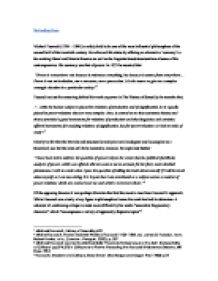 Power is Everywhere - Michael Foucault. In the books Discipline and Punish and The History of Sexuality the expression of the relationship between power and knowledge were examined

Introduction Michael Foucault (1926 - 1984) is widely held to be one of the most influential philosophers of the second half of the twentieth century. He achieved this status by offering an alternative 'currency' to the existing liberal and Marxist theories as well as the linguists-based structuralism of some of his contemporaries. His currency was that of power. In 1979 he asserted that "Power is everywhere: not because it embraces everything, but because it comes from everywhere.... Power is not an institution, nor a structure, nor a possession. It is the name we give to a complex strategic situation in a particular society".1 Foucault set out the reasoning behind his work on power in The History of Sexuality he remarks that, .".. while the human subject is placed in relations of production and of signification, he is equally placed in power relations that are very complex. Now, it seemed to me that economic history and theory provided a good instrument for relations of production and that linguistics and semiotics offered instruments for studying relations of signification, but for power relations we had no tools of study".2 Clearly he felt that the Marxist and structuralist analysis were inadequate and incomplete as a theoretical tool for the areas of life he wanted to examine. He explained further "I have been led to address the question of power only to the extent that the political (juridical) analysis of power, which was offered, did not seem to me to account for the finer, more detailed phenomena I wish to evoke when I pose the question of telling the truth about oneself. If I tell the truth about myself, as I am now doing, it is in part that I am constituted as a subject across a number of power relations which are exerted over me and which I exert over others."3 Of the opposing theories it was perhaps Marxism that had the most to lose from Foucault's approach. ...read more.

To say that s*x is not repressed, or the relations between s*x and power isn't categorised by repression, is a platform for a well-accepted argument. 'Power lays down the laws by which s*x functions and by which its workings are to be interpreted. It operates on the individual subject and his s*x through his very acquisition of language; language is the means by which the individual is initiated into society; as he acquires it he encounters the law. The law tells him what he desires by forbidding it. The pure form of power is that of the legislator; its relation to s*x is of a juridical-discursive type. Power operates on s*x in the same way at all levels.'20 Of course Foucault's concept of power knowledge reminds us of Bacon's assertion that 'Knowledge is Power'. Though Foucault distances himself from this association. Power Knowledge is a mechanism that is concerned with the gathering and collation of information about an individual. He argues that there is a relationship between power and knowledge but that they were not the same. The power of the government etc. A governing body who dictates the state of our lives by only allowing certain housing, funds and living for certain classes. Foucault stresses in many statements that 'power and knowledge' go hand in hand. Going over the 'struggles' of exercising power, the question is clear that looking at the 'knowledge' part of it, would they not have to have the 'knowledge' to gain the 'power?'21 Foucault was asked in an interview by Bernard-Henri Levy. 'Should we now think that power must be viewed as a form of war?' 'One thing seems certain to me: it is that the moment we have, for analysing the relations of power, only two models a) the one proposed by law (power as law, interdiction and institutions) and b) the military or strategic model in terms of power relations.'22 In an interview with Bernard Henri Levy, Foucault states that he is certain of one thing: 'For the moment we have, for analyzing the relations of power, only two models: a) ...read more.