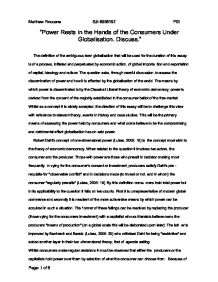 Power Rests in the Hands of the Consumers Under Globalisation. Discuss. (65/100)

"Power Rests in the Hands of the Consumers Under Globalisation. Discuss." The definition of the ambiguous term globalisation that will be used for the duration of this essay is of a process, initiated and perpetuated by economic action, of global importation and exportation of capital, ideology and culture. The question asks, through careful discussion, to assess the dissemination of power and how it is affected by the globalisation of the world. The means by which power is disseminated is by the Classical Liberal theory of economic democracy; power is derived from the consent of the majority established in the consumer ballot of the free market. Whilst as a concept it is widely accepted, the direction of this essay will be to challenge this view with reference to relevant theory, events in history and case studies. This will be the primary means of assessing the power held by consumers and what some believe to be the compromising and detrimental effect globalisation has on said power. Robert Dahl's concept of one-dimensional power (Lukes, 2005: 18) is the concept most akin to the theory of economic democracy. When related to the question it involves two actors, the consumer and the producer. Those with power are those who prevail in decision making most frequently. In vying for the consumer's consent or investment, producers satisfy Dahl's pre-requisite for "observable conflict" and in decisions made (to invest or not, and in whom) the consumer "regularly prevails" (Lukes, 2005: 19). By this definition consumers hold total power but in its applicability to the question it fails on two counts. ...read more.

In the case of Nestle's milk formula however, consumers were discontented by the harmful influence the company was having on mothers globally. A boycott of all Nestle products was organised in the United States of America and spread quickly to Europe where it was widely supported. Consumers who took part in the boycott exercised total power in the situation by Dahl's one-dimensional definition, but it is imperative to note who these consumers were and even more importantly where they come from. The movement was constructed and orchestrated by relatively wealthy citizens of the developed west. This is the basis from which to draw the conclusion that whilst universal participation is a facet of political democracy the same cannot be said for economic democracy; private wealth is undoubtedly a qualifying factor. How this manifests itself in the global system is recognised by Folker Fr�bel (1980) as the new international division of labour. It is observable in a national economy that the wealthiest have more purchasing power and thus can exert more influence on their surroundings. Frobel believes that "These national economies are, rather, organic elements of one all-embracing system, namely a world economy which is in fact a world-wide capitalist system" (Frobel, 1980: 8) in which the wealthiest nations exert the most influence on their surroundings. Just as in a national economy those who are poorest cannot hope to exert much influence on their economic environment, but on a global level it is nations, not classes that make up the poor and the rich. ...read more.

The European Union (EU) as a legitimate political institution, elected by its member states every five years is a key example of the benefits globalisation can facilitate. There is the question of whether power is compromised by EU membership and the ability of other members to influence the national decision making process, but equally the political consumer is bequeathed the ability to influence the actions taken by all other member states. The establishment of the European Convention on Human Rights, spurring the Human Rights Act in the United Kingdom established a balance of power ensuring both consumer and producers rights are protected. The weakness in the EU as a defence of the power of consumers lies the geographical and economic positions of its member states. Whilst there is some variation, in comparison to the wealth and power of states outside the EU membership is exclusively for the developed world. The purpose of this essay was to assess, through careful discussion, the extent to which consumers wield power in the globalised world. The stated thesis was that the power wielded, although always present, is limited by wealth inequality and by the actions of other actors; namely the producers and capitalists that intersect the two of them. This thesis has been proved accurate to a great extent but the additional correlation of geographical location determining consumer and producer power serves to further improve its applicability. The power held by consumers fluctuates dependent on the actions of capitalists in their vying for investment and geographical location whilst the power held by producers has been, in the third world, almost entirely vanquished and absorbed by their capitalist rulers. ...read more.