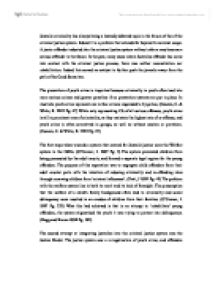 Juvenile criminality has always being a heatedly debated topic in the forum of the of the criminal justice system. Indeed it is a problem that extends far beyond its nominal scope. A junior offender inducted into the criminal justice system without reform may become a serious offender in the future. In the past, many cases where Juveniles offender has come into contact with the criminal justice process, there was neither reconciliation nor rehabilitation. Indeed this served as catalyst to further push the juvenile away from the path of the Good Samaritan. The prevention of youth crime is important because criminality in youth often lead into more serious crimes and greater penalties if no prevention systems are put in place. In Australia youth crime represent one in four crimes responded to by police, (Cuneen, C. & White, R. 2002 Pg: 67) While only representing 4% of all serious offences, youth crime is still a prominent area of criminality, as they maintain the highest rate of re-offence, and youth crime is often committed in groups, as well as without caution or provision. (Cuneen, C. & White, R. 2002 Pg: 65) The first steps taken towards a system that catered for Juvenile justice were the Welfare system in the 1960s. ...read more.

In addition it took into account matters such as the social and economical background of the offenders. In this the restorative system have three main foci, it puts emphasis on the feelings and experience of the victims, it gives legal actors decision making authority, and it sets a setting where all parties, such as the victims and the offenders can communicate to work out problems. (AIC 2004 Pg: 1) The restorative justice system has seen the rise of several programs both short term and long term to deal with the problem of juvenile criminality. The Yong Offenders act saw the use of new ways to engage with potential and occurring young offenders. The processes involved giving a warning to the child, issuing cautions and holding youth conferences for non-serious offenders. (Johns, R. 2003 Pg: 12) The point of this was to establish a "limited police and justice system resources through a significant increase in the use of alternative interventions for young people." (Johns, R. 2003 Pg: 13) In performing theses roles, as new occupation was created within the police force called the Specialist Youth Officer. The Specialist Youth Officer is a member of the police service who is appointed by the commissioner of police for the purpose of the act. ...read more.