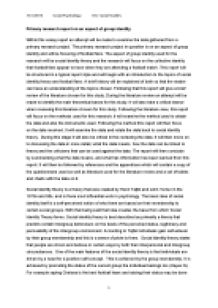 Primary research report on an aspect of group identity in football fans.

﻿50026494 Social Psychology BSc Social Studies Primary research report on an aspect of group identity. Within this essay report an attempt will be made to examine the data gathered from a primary research project. The primary research project in question is on an aspect of group identity and will be focusing of football fans. The aspect of group identity used for the research will be social identity theory and the research will focus on the collective identity that football fans appear to have when they are attending a football match. This report will be structured in a typical report style and will begin with an introduction to the topics of social identity theory and football fans. A brief history will be explained of both so that the reader can have an understanding of the topics chosen. Following that this report will give a brief review of the literature chosen for this study. During the literature review an attempt will be made to identify the main theoretical bases for this study. It will also take a critical stance when reviewing this literature chosen for this study. Following the literature view, this report will focus on the methods used for this research; it will examine the method used to obtain the data and also the instruments used. ...read more.

He began his research from a social identity theory standpoint and undertook an online research in which he 256 participants to partake through questionnaires and message boards. His finding show that the results suggested that fans with high group identification rated fans who changed team allegiance significantly less trustworthy and reasonable, and more self-centred, than fans who were lower in group identity. Fans with high group identification also rated their partner, children, career and money significantly less important, whilst their football team was rated significantly more important (bps.org.uk). For the second piece of literature, the one that was used was a study on the Greek Football Fans and their national identity after a defeat. This study used an internet survey shortly before and after the match using questionnaires. This survey included 52 participants and the results showed that the main finding was that, despite expressing disappointment about the team?s failure to replicate the result which had occurred four years earlier, fans rated their national identity high. Of those who completed both questionnaires, national identity remained stable from before to after the competition (bps.org.uk). Method In research an important topic to consider is if the correct method has been chosen to collect data. The method chosen in this research in collecting the data was in the form of questionnaires. ...read more.

The participants were tied on thinking that there are superior and sometimes thinking they are. This could be a result of constant competition and rivalry between groups for example football team rivalries. It could also be a result of the fact that according to social identity theory groups are constantly put each other down so this feeling could result from here. This shows that the majority have been in arguments with other groups while defending their own team. This could be because they believed that an attack against their team was attacking the group and thus attacking their group identity. Also the other groups don?t share the same beliefs values etc. that their group does so there would be more chance of an argument or fight. This result shows that although they are part of the group they are not comfortable arguing or ever criticising the group. This could be due to fear of rejection from the group Conclusion So to conclude this research report aim was to find out what similarities do group identity and behaviour have in common with football fans and the answer is much. Social identity theory covers and explains each of the questions asked in this research it can also be used to answer most questions in relation to football fans and this data shows there if a group identity within the football fans surveyed. ...read more.