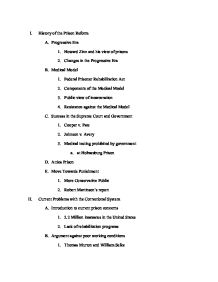 PRISONS: AMERICAS CRIMINAL WAREHOUSES. Recent budget crises and the rapid increase of incarceration rates are forcing states to re-examine the effectiveness and efficiency of their jail systems. It is clear that it is time to move away from a mod

Numerous of young adults were sentenced to prison and the conservative public, less sympathetic to "un-American" activities, though the prison system should be harder and tougher to discourage any more crime. In Prison and Jail Administration: Practice and Theory, the authors wrote, "The media, politicians, and the general public began to use words like "mollycoddling" and "country club prisons" to describe some approaches and facilities of prisons" (Carlson and Garrett 14). The prison system became caught up in the debates surrounding society's ability to punish as it had for so many years. The correctional system started to move away from the medical model and towards emphasizing punishment as the purpose of incarceration. By the late 1970s, the medical model had been eliminated from the correctional systems in the United States. A major blow to the medical model was a rather infamous report produced in the early 1970s by a researcher studying rehabilitation programs across the country. Robert Martinson's report was called the "nothing works" syndrome (Carlson and Garrett 16). This report attempted to show that there was no significant difference in recidivism rates for those in rehabilitation programs and those who were, assuming a lower recidivism rate to be the result of the rehabilitation programs. Rehabilitation programs were too gentle on crime, and it became difficult to sell these ideas to a society that was increasingly focused on punishment. ...read more.

Most of the people that will be incarcerated would have committed non-violent crimes, so not all criminals present a threat to society and should be incarcerated to an extended amount of time. With about 50 billion dollars being spent a year on prisons, their effectiveness is too be expected. However, more than half of inmates return to prison after being released and the crime rates have not shown any significant and positive change. The current correctional systems in the United States are, on average, the third-largest state expenditure, yet America has not gotten any safer. The number of prison inmates is projected to grow three times faster than the national population and the United States is not prepared to handle such a rapid increase in imprisonment, especially in the current economic crisis. According a research and advocacy organization in New York by the name of Vera Institute of Justice, "From 1985 to 2010, spending on prisons grew 674 percent, to $52.95 billion, according" (Katel). Prisons, jails, and other correctional environments have gone through many changes, as has American society. As the American public remodels the world outside, correctional facilities adopt new attitudes and philosophies. The changing and evolving society in America calls for a new evaluation of this nation's prisons. It is time the ineffectiveness of the current correctional system is recognized, in order to propose solutions to the worsening conditions in prisons. As Dostoevski once said, "The degree of civilization in a society can be judged by entering its prisons. ...read more.