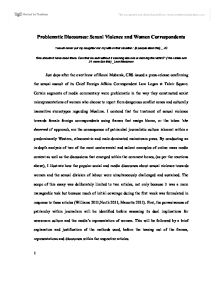 Problematic Discourses: Sexual Violence and Women Press Correspondents. First, the pervasiveness of patriarchy within journalism will be identified before assessing its dual implications for newsroom culture and the medias representation of women. This

Problematic Discourses: Sexual Violence and Women Correspondents 'I would never put my daughter nor my wife in that situation.' (9 people liked this) _ JG 'She shouldn't have been there. Can that be said without it seeming like one is blaming the victim?' (The UnMa and 31 more like this) _Larz Blackman Just days after the overthrow of Hosni Mubarak, CBS issued a press-release confirming the sexual assault of its Chief Foreign Affairs Correspondent Lara Logan at Tahrir Square. Certain segments of media commentary were problematic in the way they constructed sexist misrepresentations of women who choose to report from dangerous conflict zones and culturally insensitive stereotypes regarding Muslims. I contend that the treatment of sexual violence towards female foreign correspondents using frames that assign blame, or the token 'she deserved it' approach, are the consequence of patriarchal journalistic culture inherent within a predominantly Western, ethnocentric and male-dominated mainstream press. By conducting an in-depth analysis of two of the most controversial and salient examples of online mass media content as well as the discussions that emerged within the comment boxes, (as per the reactions above), I illustrate how the popular social and media discourses about sexual violence towards women and the sexual division of labour were simultaneously challenged and sustained. The scope of this essay was deliberately limited to two articles, not only because it was a more manageable task but because much of initial coverage during the first week was formulated in response to these articles (Williams 2011;North 2011; Marcotte 2011). First, the pervasiveness of patriarchy within journalism will be identified before assessing its dual implications for newsroom culture and the media's representation of women. ...read more.

Finally, there was a significant number of commenters engaging in the a more subtle kind of benevolent sexism, or protective paternalism, which it is claimed is easier for women to adopt since it appears to positively support 'women's' values (Bamburac 2006, p.27). Interestingly, those commenters who advocated that women correspondents should be excluded from warzones for their personal safety all justified this position in similar ways. Instrumentalizing the rhetoric of'...it's a just simple fact of reality' (SomeChick), '(it's) good ole common sense' (Sympathizer), '...join the real world' (Guest), these appeals to the logic of the real world confirmed how patriarchal ideology is disguised within aspirations to maintain the unequal status quo (Conway et. al., 1996). Ultimately, it is benevolently sexist and chauvinist commentaries which catalyse and sustain the popularity of a media blacklash discourse against victims and depoliticize the censure of women for engaging in risk-taking behaviour atypical of the female gender norms of passivity and dependence (Hoagland and Frye 2000, p.33). As former war correspondent Hilary Andersson (2003 p.22) confirms, women reporters in conflict zones are held to a different standard of accountability because of their entry into the masculinist, gendered space that is war, especially by the media who comment 'on our attire, our hair, our personal histories and oh yes, our abilities'. Feinstein (2003, p.124) adds that female war journalists subsequently develop unique characteristics, such as a resistance to the emotional consequences of trauma which in conjunction with the media's tendency to blame the victim in incidents of sexual assault, only encourages silencing for women who have experienced sexual violence whilst on assignment (Matloff 2007). Not only were the capabilities and inculpability of Logan called into question in the next article, but her assault became the site for the intersection of gender and cultural politics in the media as well. ...read more.