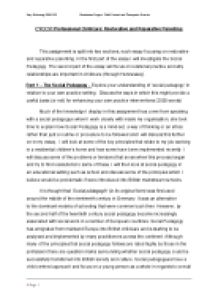 ï»¿Gary Pickering 20042188 Foundation Degree: Child Centred and Therapeutic Practice CYCC51 Professional Childcare: Restorative and Reparative Parenting This assignment is split into two sections, each essay focusing on restorative and reparative parenting. In the first part of the essay I will investigate the Social Pedagogy. The second part of the essay will focus on relational practice and why relationships are important in childcare (through Hennessey). Part 1 – The Social Pedagogy - Explore your understanding of ‘social pedagogy’ in relation to your own practice setting. Discuss the ways in which this might provide a useful basis (or not) for enhancing your own practice interventions (2000 words) Much of the knowledge I display in this assignment has come from speaking with a social pedagogue whom I work closely with inside my organisation, she took time to explain how Social Pedagogy is a mind-set, a way of thinking or an ethos rather than just a routine or procedure to be followed and I will discuss this further on in my essay. I will look at some of the key principles that relate to my job working in a residential children's home and how some have been implemented recently. I will discuss some of the problems or tensions that arose when this process began and try to find resolutions to some of these. I will then look at social pedagogy in an educational setting such as school and discuss some of the principles which I believe would be problematic if were introduced into British mainstream schools. It is thought that ‘Sozial pädagogik’ (in its original form) was first used around the middle of the nineteenth century in Germany. It was an alternative to the dominant models of schooling that were common back then. However, by the second half of the twentieth century social pedagogy became increasingly associated with social work in a number of European countries. ...read more.

as stated earlier this is to focus on personal development or ?the human condition? as described in some cases. It is easy to say that these points could easily be transferred into our educational system here in Britain but to what extent? For example many schools in the country have been crying out for smaller class sizes and more work one to one in the classroom. However due to school funding and budget cuts this has not been achieved. ?UK state primaries have 24.5 pupils per class - the fourth largest of the 30 Western countries which make up the Organisation for Economic Co-operation and Development (OECD).? (Shepherd, 2008) If schools with in the UK cannot afford to employ more teaching staff during school hours then it is unlikely to be able to completely revamp the ethos of British education and integrate the ways of social pedagogues and this I think is where the problem lies education-wise. In summary I believe that the outlook and principles that a social pedagogue possesses and tries to promote would be a valuable asset to British childcare as a whole. However I do believe that the whole childcare system would have to be re-designed or revamped from the bottom up. Starting with nursery or preschool and working up to college. Also from foster care through to residential homes and the way that staff are trained would have to change to incorporate and teach the views and principles of social pedagogy. I do have doubts over whether the country as a whole could realistically afford to implement the ways that social pedagogy is applied throughout the educational system in mainstream schools within the United Kingdom - taking into account how much it is struggling financially at the moment. Thus said I do believe that residential care throughout the United Kingdom could hugely benefit from some of the notions and principles behind social pedagogy. ...read more.

The young person will be totally unaware of the fact that they behave in a challenging way because of attachment disorder and the only long term solution is for adults not to give up, to show love and care and be positive role models. This powerful quote by Richard L. Evans reiterates the importance of the constant work we do to help young people overcome their problems. ?Children will not remember you for the material things you provided but for the feeling that you cherished them.? (Delaflor and LaHaye, 2006:124) On the other hand attachment theory may not be viewed as an overall positive way to view a young person?s development. Attachment theory tends to be used with people who have already been labelled or even potentially Pathologised as disadvantaged or ?damaged?. It is also important to remember, as Hennessey emphasises in terms of being self-aware, that ?attachment? as an idea might also relate to the worker and their working practices. Hennessey?s initial statement about relationship based practice is: ?A commitment and growing ability to know the self?. This is a very valid point and an interesting way of viewing the other side of attachment and also relationships as a whole. How can we expect to build a relationship with the child if we do not fully understand our own self? We must be aware of our emotions and also how we are to be perceived by a potentially vulnerable young person. In summary I believe that Hennessey?s points about relationship based practice are valid. In particular the first bullet, as it relates highly to my job role and also my views on attachment theory fit well alongside his notions. Building relationships with young people and especially vulnerable or disadvantaged young people placed in care can be tough and challenging but we must keep the child at the fore and ?soldier on?. By noting Hennessey?s theory and being aware of the points he makes about ?knowing the self? and ?knowing the other person? we can all begin to build positive relationships and in time achieve better outcomes. ...read more.