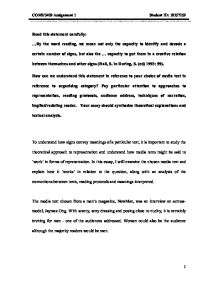 Read this statement carefully: ...By the word reading, we mean not only the capacity to identify and decode a certain number of signs, but also the ... capacity to put them in a creative relation between themselves and other signs (Hall, S. in During, S. (ed) 1993: 99). How can we understand this statement in reference to your choice of media text in reference to organising category? Pay particular attention to approaches to representation, reading protocols, audience address, techniques of narration, implied/resisting reader. Your essay should synthesise theoretical explanations and textual analysis. To understand how signs convey meanings of a particular text, it is important to study the theoretical approach to representation and understand how media texts might be said to 'work' in forms of representation. In this essay, I will examine the chosen media text and explain how it 'works' in relation to the question, along with an analysis of the connections between texts, reading protocols and meanings interpreted. The media text chosen from a men's magazine, NewMan, was an interview on actress-model, Jaymee Ong. With scanty, sexy dressing and posing close to nudity, it is certainly inviting for men - one of the audiences addressed. ...read more.

The materialist approach to representation emphasises on the social nature of language where meanings are shared and not simply reduced to individual meaning. The act of making representations is delimited in time, place, culture, inherited compositional practices subject to social and historical contexts (Burston 2004: 13). Each representation also takes its shape according to available discourses. The media text portrays discourses of femininity and female sexuality where women are represented as traditional objects of scrutiny. The words and photographs of the text could be interpreted into various meanings. For instance, in the Western culture, the word "naked" and photographs of women dressed sexily are deemed normal and not obscene for media publication. However, in the Asian culture, it could be deemed inappropriate if published in magazines intended for young people. Then again, as Asian culture is becoming less conventional nowadays, photographs of women posing almost naked might be appreciated and accepted in adult magazines. With this example, it proves that meanings are not autonomous and permanent, but are different and vary in terms of differing cultures and contexts. Representations and meanings are derived from individual's reading protocols. With the media text chosen, men and women who are the audiences addressed would hence, interpret the text differently. ...read more.

along with other contexts. To understand the concept of a woman's femininity and female sexuality, the audience must have knowledge about women: what kind of clothing or makeup are considered sexy and feminine, what does clothed and unclothed bodies tell, how photographs construct 'ways of viewing' and to be able to relate the concept with subjects who personify the discourse (Britney Spears, for example). Once the audience understand these conditions attached to the concept, any representation of it would make sense. While the 'preferred meaning' of the media text could be light reading with pleasure, the audience could think otherwise - as entertainment or stereotyping. Therefore, they are not implied readers who consent to the 'preferred meaning' but are instead, resisting readers based on the "negotiated code" (Hall 1993: 102) who see meanings as differential and not fixed. To conclude, 'reading' is not only about the capacity to decode signs but also about understanding representations by interpreting meanings through discourses and wider contexts. A media text may have an intended discourse but unless the readers have the acquired knowledge to decode the text, representations would not be understood. Even if representations were understood, readers' perception of meanings would differ according to various readings protocols, hence the reason why meanings are not fixed. ...read more.