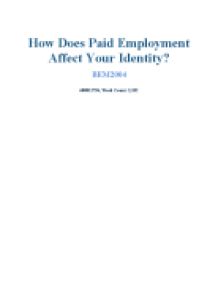 Reasons for Working. How does paid employment affect your identity?

﻿How Does Paid Employment Affect Your Identity? BEM2004 600012796, Word Count: 2,182 From a very early age we are managed and socially constructed by schools, teachers and our parents. The purpose of this identification and expectation process is arguably the production of conformity to society?s expectations (Rehn, 2009). The question ?What do you want to be when you?re older?? becomes ?What do you do for work?? There is a constant pressure to conform to what society expects of us and employment has become one of the main ways in which we evaluate other people and their identity. Grace and Woodward (2006) define two fundamental forms of identity. The way we portray ourselves to the outside world (personal identity) and our own subjective sense of knowing who we are (ego identity). I feel that it is crucial we fully comprehend the meaning of work and the effect employment may have on identity. People work for different reasons - most for economic reasons, some for ?expressive? reasons, and others, as a moral necessity or religious duty. Commitment and attitude to work appear increasingly more dynamic due to changes in the global economy. According to Sennett (1988) these changes are leading to a corrosion of character, whilst Du Gay (1996) ...read more.

This made me re-evaluate the effect of employment on identity. Striking public sector workers are constantly showing disloyalty towards their job; with unions opposing plans to make members pay more and work longer to earn pensions. Ehrenreich (2005) portrays the American equivalent of this phenomenon: ?Middle-class Americans? have been raised with the old-time protestant expectation that hard work will be rewarded with material comfort and security? (But this) is increasingly untrue of the educated middle class that stocks out bureaucracies?. I believe this concept is becoming increasingly more evident in recent years. Job security has overtaken career progression this year as the main factor influencing London City workers choices of changing jobs (Recruiter, 2011). People seem to lack control of their career and where it is heading. I strongly feel that this may alter employments effect on identity as it is no longer predictable and will vary depending on people?s employment situation with regards to security and long-term prospects. This concept of identity being constantly affected by changes in it?s external environment (in this case ? ones employment situation), is supported by Du Gay (1996) who states ?Given that identity is basically relational to its conditions of existence, any change in the latter is bound to effect the former?. ...read more.

This has led to employment lacking inherent meaning. Workers are constantly told to commit themselves to the job, but this is often difficult due to the precarious nature of modern day employment. Employees seem to lack control of their career and the direction it is heading. Thus, employments effect on identity may be unpredictable, just as the nature of employment itself. I also believe Goffman?s (1959) theory has somewhat prevailed in recent years, forced into fruition by economic forces forcing employees to act in certain ways, and to be what they do. This has had a profound effect on personal identity, according to Grace and Woodward?s (2006) definition. But not on the ego identity, which is perhaps the most important definition as it is our perception of ourselves, rather than how we choose to portray ourselves to others. Structural changes in the economic environment have also led to ?entrepreneurial identities?, in which people are now solely responsible for their own achievements. Employments effect on identity may thus vary more between individuals, with people holding different priorities of what is important to them. James (2007) would argue that all these effects have accumulated in the ?affluenza virus?, where a ?having mode? of constant acquisition has a profound negative effect on workers identities, even taking the pleasure out of other aspects of life. ...read more.