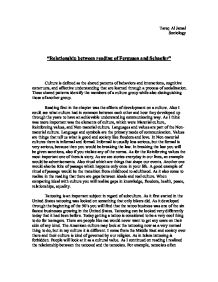 Tareq Al Jamal Sociology "Relationship between reading of Ferguson and Schaefer" Culture is defined as the shared patterns of behaviors and interactions, cognitive constructs, and affective understanding that are learned through a process of socialization. These shared patterns identify the members of a culture group while also distinguishing those of another group. Reading first in the chapter was the effects of development on a culture. Also I could see what culture had in common between each other and how they developed up through the years to have an achievable understanding communicating way. As I think was more important was the elements of culture, which were Material culture, Reinforcing values, and Non-material culture. Languages and values are part of the Non-material culture. Language and symbols are the primary mode of communication. Values are things that tell us what is good and society like freedom and love. ...read more.

As it developed through the beginning of the 90's you will find that the tattoo business was one of the six fastest businesses growing in the United States. Tattooing can be looked very differently today that it had been before. Today getting a tattoo is considered to be a very cool thing to do for teenagers. There are people like me would never want to get any scars on their skin of any kind. The American culture may look at the tattooing now as a very normal thing to do, but in my culture it is different. I come from the Middle East and society over there and their culture is kind of governed by our religion. As in Islam tattooing is forbidden. People will look at it as a cultural value. As I continued on reading I realized the relationship between the tattooed and the tattooists. ...read more.

At the end the writer describes that his people hates tourists and they really do not care that much about the industry, but what they care about more is their culture, and they want everyone to know it. One of the connections I saw between the two books was effects development does have on culture. For the Hawaiian culture which was changed due to the development made in the state. The development of state lead to the breaking of its cultural values. As I have mentioned above that tourism in the state of Hawaii brought in a lot of development. They simply traded their cultural values to catch on with the development of tourism. Another one of the connections that I saw between the two books was the tattoos and how it is considered a more in my culture. Simple because people over there in the Middle East just do not accept it as part of their society and look at it in a very shameful thing to have in the family. ...read more.