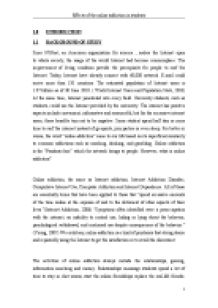 Research - In this assignment, we are trying to find the factors and effects of online addiction for university students.

﻿Effects of the online addiction in students ________________ 1.0 INTRODUCTION 1.1 BACKGROUND OF STUDY Since NSFnet, an American organization for science , makes the Internet open to whole society, the usage of the world Internet had become commonplace. The improvement of living condition provide the prerequisite for people to surf the Internet. Today, Internet have already connect with 60,000 network. E-mail could arrive more than 150 countries. The estimated population of Internet users is 1.97 billion as of 30 June 2010. ( World Internet Users and Population Stats, 2010) At the same time, Internet penetrated into every field. University students, such as students, could use the Internet provided by the university. The internet has positive aspects include convenient, informative and resourceful, but for the excessive internet users, these benefits turn out to be negative. Some student spend half day or more time to surf the internet instead of go sports, join parties or even sleep. For better or worse, the word ?online addiction? came to our life based on its superficial similarity to common addictions such as smoking, drinking, and gambling. Online addiction is the ?Pandoras box? which the network brings to people. However, what is online addiction? Online addiction, the same as Internet addiction, Internet Addiction Disorder, Compulsive Internet Use, Computer Addiction and Internet Dependence. All of these are essentially terms that have been applied to those that ?spend excessive amounts of the time online at the expense of and to the detriment of other aspects of their lives.?(Internet Addiction, 2006) ?Symptoms often identified were a preoccupation with the internet, an inability to control use, hiding or lying about the behavior, psychological withdrawal, and continued use despite consequences of the behavior.? (Young, 2007) We could say, online addiction is a kind of psychosis that strong desire and repeatedly using the Internet to get the satisfaction or to avoid the discontent. The activities of online addiction always include the relationships, gaming, information searching and money. ...read more.

According to do a survey, a big amount of students would like to surf on the internet use more time. For 30 responders, there are 16 of them put surf on the internet to the first. Students also do a lot of sports to spend their time. A few of responders will go shopping, do part-time job, travel and join club to spend their free time. For students, they have a lot of activities. Those who rely on the internet may have addiction to internet. Because the convenience of internet, more and more students will spend more time on go online. It is easy to get information, to communicate with others. It is help them to far away from loneliness. According to the secondary data, the Internet is an easily obtained way and quickly for you to relieve stress or self-soothe, evade your problems when you have a bad day .It can temporarily make these feelings such as loneliness, stress, anxiety, depression, and boredom evaporate into thin air when losing yourself online.( Saisan, Smith, Robinson, and Segal, 2008). Students would like to choose to go online instead of attend real activities. 4.2 Figure2 Answer 0-4hours 5-8hours 9-12hours above12 Frequency 7 15 6 2 Percentage 23% 50% 20% 7% Table 2 All above this question, we found that half of student surf the Internet for 5-8 hours. Even there is 20% person use 9-12 hours online. 10% people only use less than 4 hours. We all know the day-time only have 12 hours but half of respondent get online for 5-8 hours means may be more than half of day time they used to online. According to Joanna Saisan(2010), she notice that being online with a long time which can cause physical discomfort such as: Carpal Tunnel Syndrome (pain and numbness in hands and wrists), Dry eyes or strained vision, Back aches and neck aches; severe headaches, Sleep disturbances and Pronounced weight gain or weight loss. ...read more.

However, implement a survey, both positive and negative results could happened and we must prepare to respond. The result of this study shows that there are too many factors and effects of online addiction of students. In fact, this research are only the information that we get from students which study in International University and it is not related with other university students or other parts in society since they didn?t join this program. When we conducting of this research, we also face some limitations. First, we had difficulty in finding our main journal and article cause there are a variety of articles and journals and hard to find the best one. Secondly, we had encountered problems during our questionnaire session where the respondent did not give back on time. Another problem in survey is the respondents limit in Malaysian and Chinese, lack of other foreigners such as European. Besides, because of our group members all have different time table, thus we are hard to find a suitable time to do the discussion as we all not live together and facing some trouble during doing this report. 5.3 RECOMMENDATIONS AND SOLUTIONS Based on the findings and conclusions of the study, there are several recommendations can be considered: 1. People need to realize the limitations of spend too much time online. It is better for students have a detailed plan before they surf the Internet and avoid spend too much time online. (Grohol, 2005) 2. Take frequent breaks, at least 5 minutes each hour, and do some other activity such as do the sports. Stay connected to the offline world. Visit newsstands, book and music stores, and participate in entertainment such as museums, music, and live theater. (Saisan, Smith, Robinson, and Segal, 2008) 3. Surfing couldn?t regard as a tool of escape from real-life problems. Because when you off-line, you will find the problems still be there. 4. Ask for help from friends and parents. When you are playing on the internet, they can talk to you or ask you to do exercise. It better than surfing the internet. ...read more.