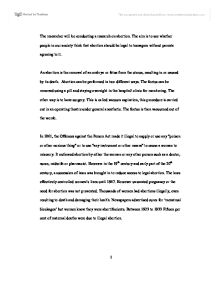 Research on views on abortion. The researchers hypothesis is, abortion should not be allowed to under 18s without parental consent. The researcher plans to use ten parents in her study and ten non parents aged between 19 and 30.

The researcher will be conducting a research on abortion. The aim is to see whether people in our society think that abortion should be legal to teenagers without parents agreeing to it. An abortion is the removal of an embryo or fetus from the uterus, resulting in or caused by its death. Abortion can be performed in two different ways. The foetus can be removed using a pill and staying overnight in the hospital/ clinic for monitoring. The other way is to have surgery. This is called vacuum aspiration, this procedure is carried out in an operating theatre under general anesthetic. The foetus is then vacuumed out of the womb. In 1861, the Offences against the Person Act made it illegal to supply or use any "poison or other noxious thing" or to use "any instrument or other means" to cause a woman to miscarry. It outlawed abortion by either the woman or any other person such as a doctor, nurse, midwife or pharmacist. However in the 19th century and early part of the 20th century, a succession of laws was brought in to reduce access to legal abortion. The laws effectively controlled women's lives until 1967. However unwanted pregnancy or the need for abortion was not prevented. Thousands of women had abortions illegally, even resulting to death and damaging their health. Newspapers advertised cures for 'menstrual blockages' but women knew they were abortifacients. Between 1923 to 1933 Fifteen per cent of maternal deaths were due to illegal abortion. In 1990, the human fertilization and embryology Act introduced control over new techniques which had been developed to help infertile couples and to monitor experiments on embryos. This law was put in place to attempt to restrict abortion. ...read more.

Q: From a medical perspective is abortion right? A: some abortions are medical related whereas most of them are social. Personally I do Not think its right. Q: what sort of complications can occur during abortions? A: Bleeding infection, physical injuries to the uterus or the womb, psychological Problems as many of the women end up regretting. In some cases even death because Abortions are performed under general anesthetic. Q: in the NHS what age groups do you see aborting the most? A: Mostly between 16 and 21 Q: Why do you think this is? A: teenage pregnancy, lack of s****l health education, easy way out. Some grow up in Poor living conditions and do not know any better. Q: do you think that there is enough information given to teens about abortion? A: I think the government should be aggressive on the laws of abortion. The media Should get involved by advertising the risks mental and physical, parental. Involvement as well. Some teens just don't have respect for their lives anymore Q: is it easy to get an abortion in the NHS? A: yes all you need is consent from two doctors. Q: you mentioned that an individual could die from abortion, how this would be Explained to a parent if the girl was 16years old. A: well an enquiry would be done first, it would be checked to see if it was a system failure or not. Before the abortion consent forms are signed and all the cons are explained so The individual goes to theatre knowing what could or could not happen Q: thank you for your time Doctor Brian Chivima, you have been a great help. ...read more.

Out of the chosen sample of respondents, the parents stated that they thought that parental consent should be given to young adults below the age of 18. Interestingly most of the respondents that said no to parental consent were the same people that gave a lower age limit to what they think it should be for an abortion. According to Dr Brian Chivima, abortions are not right except where a mother is in danger or something medically wrong with them. He does not think that parents should give consent as it is an individual's decision what to do with the baby. However the largest amounts of people having abortions are between 16 and 21 proving the hypothesis right. However there is not a real explanation as to what sort of information the parents will be given if a death was to occur except the fact that a contract would have been signed by the individual having an abortion. The questionnaires however showed that parental consent should be given to under 18's for abortions. As doctors perform these abortions, they probably look at it from a medical perspective which makes it right to do so. The researcher thinks that the risks of abortion should be made public and known to all to try and prevent teenage pregnancies. Contraception, parent involvement and s*x education should be made clearer in order to avoid abortions. The researcher would recommend that for any future replications of this study, a larger sample should be used to gather more information so that the results represent a larger portion of society. Materials used Haralambos and Holbon (2000) Sociology Themes and Perspectives 6th Edition, Collins http://www.bpas.org/bpaswoman.php?page=7 (4/05/08) (see attached) http://www.abortionrights.org.uk/index.php?option=com_content&task=view&id=18&Itemid=44 (4/05/2008) (see attached) ?? ?? ?? ?? 1 ...read more.