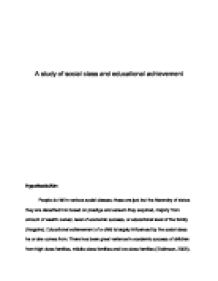 Research Outline. A study of social class and educational achievement

A study of social class and educational achievement Hypothesis/Aim People do fall in various social classes; these are just but the hierarchy of status they are classified into based on prestige and esteem they acquired, majorly from amount of wealth owned, level of economic success, or educational level of the family (Maguire). Educational achievement of a child is largely influenced by the social class he or she comes from. There has been great variance in academic success of children from high class families, middle class families and low class families (Dickinson, 2009). Therefore, there is need to determine if such achievements have connection with the background the children came from or it is just unexplainable coincidence. It is widly consider how 'social classes' affected on educational achievement. Context and Concepts The findings of academics from Kings College London and those of University College London gives direction that performances of students in school is largely dependent on the student's academics ability, the quality of teachers, the teaching methodologies, the management system of the school, the type of school one attends, or even the location of the school (Taylor, 2006). ...read more.

Parents understanding are simply them coming to terms with the reality concerning actual causes of the observed performances of their children in school. On the other hand, government action is the steps the government would take to ensure they act well to address challenges that come with the same. Main Research Method and Reasons for choosing method For successful outcomes and with most appropriate data, a survey questionnaire needs to be designed while catering in all the vital questions that would give good answer to the hypothesis formulated (Statpac). Survey questionnaire not only help in getting quantitative data which include statistics and numbers but it can be used for larger samples (Statpac). The questions in questionnaire should by greater extent target views of teachers, students and parents supported with facts such as copies of academic reports form of students; the same group would act as the sample group where 10 parents, 10 teachers and 10 students from each of 10 different schools found in locations with residents of varied social status would be presented with printed questionnaires to fill. ...read more.

Given the impersonal nature of questionnaires, it could be difficult for the researcher to understand the responses given by those that filled then, or worse, there are chances that questions could not be interpreted incorrectly thereby making answers not to have any value (Tampere University of Technology). In some instances, there are people who would be feeling embarrassed to respond to particular questions in the questionnaire, or would go extra mile and fabricate the reality with the intention of pleasing the researcher; such data would misinform researcher thereby giving inappropriate deductions. Collection of data using questionnaires from the sample population and analysis of the same especially given that the questions are open ended would be time consuming. It would be challenging to reach the entire target sample from a wide range of coverage, make them fill the questionnaires and then researcher doing analysis of the data. For the research to be carried out, good amount of money needs to be in place which would cover the designing of questionnaires and printing them (Presser, 2004). Travelling cost to all the target locations would also be high. Also, one has to dedicate time and energy for the success of the conducted research. ...read more.