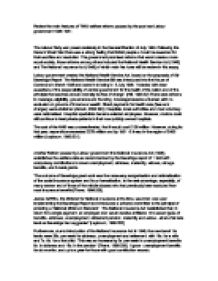 Review the main features of TWO welfare reforms passed by the post war Labour government 1946-1951. The Labour Party won power decisively in the General Election of July 1945. Following the Second World War there was a strong feeling that British people should be rewarded for their sacrifice and resolution. The government promised reforms that would create a more equal society, those reforms among others included the National Health Service Act (1946) and The National Insurance Act (1948) of which main features will be review in this essay. Labour government created the National Health Service Act, based on the proposals of Sir Beveridge Report. ...read more.

were abolished (Alcock, 2008:243). Hospitals, local authorities and most voluntary were nationalised. Hospital specialists became salaried employees. However, doctors could still continue to treat private patients in their now publicly owned hospitals. The cost of the NHS was underestimated, that it would cost �126 million. However, during its first year, expenditure exceeded �278 million and by 1951-2 it was in the region of �400 million (Laybourn, 1995:231). Another Reform passed by Labour government the National Insurance Act (1948), establishes the welfare state as recommended by the Beveridge report of 1942 with compulsory contributions to cover unemployment, sickness, maternity, widows, old age benefits, and funeral grants. ...read more.

Furthermore, due to introduction of the National Insurance Act in 1948, the new benefits levels were 26s. per week for sickness, unemployment and retirement, with 16s. for a wife and 7s. 6d. for a first child. 'This was an increase by 2s. per week in unemployment benefits 8s. in sickness and 16s. in the pension' (Thane, 1996:238). It gave unemployment benefits for six months, and up to a year for those with good contribution records. To sum up under Labour governments major changes were made to national insurance and national health services. Beveridge Report has been very influential for Labour in creating its reforms at the time, and more or less they accepted Beveridge broad ideas about welfare state. ...read more.