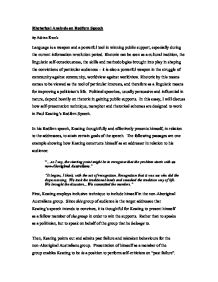 Rhetorical Analysis on Redfern Speech By Adrian Kwok Language is a weapon and a powerful tool in winning public support, especially during the current information revolution period. Rhetoric can be seen as a cultural tradition, the linguistic self-consciousness, the skills and methodologies brought into play in shaping the convictions of particular audiences - it is also a powerful weapon in the struggle of community against community, worldview against worldview. Rhetoric by this means comes to be viewed as the tool of particular interests, and therefore as a linguistic means for improving a politician's life. Political speeches, usually persuasive and influential in nature, depend heavily on rhetoric in gaining public supports. In this essay, I will discuss how self-presentation technique, metaphor and rhetorical schemes are designed to work in Paul Keating's Redfern Speech. In his Redfern speech, Keating thoughtfully and effectively presents himself, in relation to the addressees, to attain certain goals of the speech. The following passages are one example showing how Keating constructs himself as an addresser in relation to his audience: "...as I say, the starting point might be to recognise that the problem starts with us non-Aboriginal Australians." "It begins, I think, with the act of recognition. Recognition that it was we who did the dispossessing. ...read more.

The metaphor offers transference and compares the various hidden meanings to the simple everyday action of "opening a door", saying to the readers that the effort of accepting indigenous people, accepting their culture, etc, is as easy as opening a door. Additionally, base on the connotations of "door", the metaphor has its extra meanings. Here, the connotations of door include separation and security. A shut on the door means that non-Aboriginal Australians have been protecting themselves against indigenous people, treating indigenous people like "thieves" and "criminals". In this sense, now opening the door is seen to be an action that signifies non-Aboriginal Australians' recognition of the past prejudice, and an action of quitting discrimination and exclusion on indigenous Australians. Keating's choice of using "open the door" as a metaphor is successful because this action is so common and familiar to everyone. It is also successful in a way that Keating has locates the metaphor in a final part of a parisosis or a list of three: "Improving living conditions", "raising the health standard" and finally "opening the door". This allows readers to perform quick interpretations from the metaphor since the first two items in the list provide clues on what the metaphor will be about. One of the more interesting rhetorical devices Keating uses in Redfern speech is the anaphora technique. ...read more.

There are two questions arises in here: Are people persuaded by the actual policies promoted by politicians? Or are people persuaded by the delicate rhetoric employed by them? In classical rhetoric, the tropes and schemes fall under the canon of style. These stylistic features certainly do add spice to writing and speaking. And they are commonly thought to be persuasive because they dress up otherwise mundane language; the idea being that we are persuaded by the imagery and artistry because we find it entertaining. There is much more to tropes and schemes than surface considerations. Indeed, politicians and pundits use these language forms to create specific social and political effects by playing on our emotions. The three strategies I have examined in the Redfern speech are good examples. Reference: Thwaites, Tony, Lloyd Davis, Warwick Mules. Tools for Cultural Studies. South Yarra: Macmillan, 1994. Liebes-Plesner, Tamar. "Rhetoric in the service of justice: The sociolinguistic construction of stereotypes in an Israeli r**e trial." Text 4 Vol.4, no. 1-3. 1984: pp.173-192. Paine, Robert. "The Political Uses of Metaphor and Metonym: An Exploratory Statement." Politically speaking : cross-cultural studies of rhetoric. Chap. 10, 1981: pp.187-200 Keating, Paul. "Australian Launch of the International Year for the World's Indigenous People." Paul Keating's Redfern Speech. 10 December, 1992. <http://apology.west.net.au/redfern.html> (8 November, 2002) Silva Rhetorica. "Anaphora." Silva Rhetoricae. 16 July, 2002. <http://humanities.byu.edu/rhetoric/silva.htm> (8 November, 2002) ...read more.