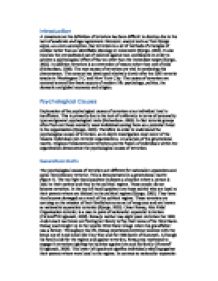 Root causes of terrorism. Analysts such as Tore Bjorgo argue that terrorism is a set of methods of strategies of combat rather than an identifiable ideology or movement (Bjorgo, 2005).

Introduction A consensus on the definition of terrorism has been difficult to develop due to the lack of academic and legal agreement. However, analyst such as Tore Bjorgo argue, as a core assumption, that terrorism is a set of methods of strategies of combat rather than an identifiable ideology or movement (Bjorgo, 2005). It also involves the premeditated use of violence against non-combatants in order to achieve a psychological effect of fear on other than the immediate target (Bjorgo, 2005). In addition terrorism is an extremism of means rather than one of ends (Richardson, 2006). The root causes of terrorism are vital in combating this phenomenon. The concept has developed relatively slowly after the 2001 terrorist attacks in Washington D.C and New York City. The causes of terrorism are centered around four basic aspects of modern life: psychology, politics, the domestic and global economy and religion. Psychological Causes Explanation of the psychological causes of terrorism at an individual level is insufficient. This is primarily due to the lack of uniformity in terms of personality type and general psychological traits (Richardson, 2006). In fact terrorist groups often flush out those mentally weak individuals seeing them as a potential threat to the organization (Bjorgo, 2005). Therefore in order to understand the psychological causes of terrorism, an in depth investigation must occur of the reasons individuals join terrorist organizations. An analysis of the generational matrix, religious fundamentalist terrorists and the fusion of individuals within the organization demonstrate the psychological causes of terrorism. ...read more.

This situation arises due to two reasons. It firstly arises when a state is unable to collaborate its resources and has a limited ability to deliver them (Forest, 2006). This is often the case with new fragile states in which governments perceives themselves as challenged or threatened by large portions of society attempting to rule over them. The second cause of powerlessness for a state is when the targeted group is not receptive to specific standard responses by the government (Forest 2006). This is highly dependant on the level of vulnerability of this group. Organizations tend to be less vulnerable, and therefore unreceptive, to conventional government actions when they bolstered by a large proportion of the population or when their commitment to their values and ideologies is high (Bjorgo, 2005). This often occurs in newly established states that engage in conflict with a specific group. An example of this is al-Quaeda in Iraq during 2004. Therefore as it is difficult to entertain the idea of engaging in acts such as war against the majority of its population or a particularly committed organization, states are often forced to utilize terrorism (Forest, 2006). Terrorism and Foreign Policies Over the past centuries, particular western foreign policy, have provided motivation for terrorist acts. The impetus for terrorism, particularly in the Middle East, can be traced back to such individuals as Richard of Lion-hearted, and the irresponsible behavior of the European colonialists (Richardson, 2006). Over the last few decades, there has been a conflict between Islamic states and the foreign policies of the US and its allies (Bjorgo, 2005). ...read more.

Secondly, minorities provide a source of funding due to payments of protection, membership or a split of criminal profits. Thirdly, new minorities are a source of human capital for international terrorism. Terrorist organizations prey on the instability of these new minorities as was exemplified by the 2005 London Bombings (Forest, 2006). Religious Causes Hector Avalos strongly argues that the necessity of violence is often built into the structure of religion. The violent acts perpetrated by an individual are justified as spiritual blessings (Richardson, 2006). This motivates individuals to commit acts of terrorism. An example is the bombings of abortion clinics and the shooting of abortion clinic staff by Lutheran and Presbyterian activists in Maryland and Florida (Richardson, 2006). However, this concept is considered quite controversial as a root of terrorism as each religion sees themselves as non violent. In addition many observers have pointed out that very few conflicts are about religion rather they are about national territory, political leadership and socioeconomic control (Richardson, 2006). In contrast, Mark Juergensmeyer contends that religion is an indirect cause of terrorism as it has a close ties with political leaders and the moral make up of society (Richardson, 2006). For example, in Hinduism the kings were thought to uphold the divine order through the white umbrella of dharma (Forest 2006). Conclusion The concepts of psychology, religion, the economy and politics have been extremely influential in the creation and subsequent growth in terrorism. They provide terrorist organizations with the impetus and justification to commit atrocities particular groups in society, states and the general global community in order to express their ideology and influence the structure, beliefs and make of society. ...read more.