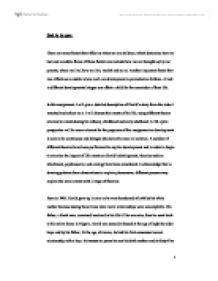 Sad to be gay.

Sad to be gay. There are many factors that affect us when we are children, which determine how we turn out as adults. Some of those factors can include how we are brought up by our parents, where we live, how we live, wealth and so on. Another important factor that also affects us as adults is how well our development is promoted as children. A lack in different developmental stages can affect a child for the remainder of their life. In this assignment, I will give a detailed description of David's story from the video I watched and reflect on it. I will discuss the events of his life, using different theory relevant to events during his infancy, childhood and early adulthood. A life-cycle perspective will be more relevant for the purposes of this assignment as development is seen to be continuous and changes should not be seen in isolation. A number of different theories have been put forward to explain development and in order to begin to examine the impact of life events on David's development, theories such as: attachment, psychosocial, and ecology have been considered. I acknowledge that in drawing patterns from observations to explain phenomena, different persons may explain the same events with a range of theories. ...read more.

For a person who could not see himself without having s*x, I wonder how he has managed to survive two months. I will now attempt to discuss David's life events using different theories. David was abandoned at birth and was cared for by different workers. In the video he states that often people comment that "you have done very well for somebody who grew up in care" and he continues to say that he has been through a lot and all those experiences have made him stronger. He managed to develop relationships with other people around him including his father. Bowlby argued that six months to three years constitutes a critical period in the formation of attachment. He believed that "During that time the child needs continuous love and care" (Cowie, 1994 p6). His colleague Mary Ainsworth devised a way of measuring the quality of infants' attachment to their caregivers, known as the "Strange situation" (Crawford & Walker, 2003 p45). From using this method, Ainsworth concluded that if their caregivers were emotionally available, sensitive and supportive during the first year, children developed a secure attachment as in David's case. Bowlby believed that prolonged separation of the child from the mother (Maternal Deprivation) was a major cause of 'delinquent' behaviour and mental health issues (Crawford & Walker, 2003 p44), however, in David's case there is no evidence suggesting that. ...read more.

The macro-system may be considered the outermost layer in the child's environment. While not being a specific framework, this layer is comprised of cultural values, customs, and laws (Crawford &Walker, 2003 p19).Considering David's life within the wider macro-system, he grew up during the times of "protest and transformation", freedom to sexuality and Conservatives were in power then, policies were changing recognising homosexuality as no longer an imprisonable offence and he says that "by the time I thought I was gay most people were coming out and the Gay rights movement was set up". Even though the wider society's response was negative to homosexuality because heterosexuality had been the norm, the media played a part in making sure that gay was seen as right. In terms of exo-systems we are not given any information. In summary this assignment has attempted to look at David's developmental stages in life using different theories. However, this has not been a simple process as it has been hindered by little or no information in some aspects of his life. I am aware that individuals move through life at different rates and according to unique factors making it difficult to generalise from one individual or family to another. When all factors are taken into consideration and a non-linear approach is adopted it would seem that David's development is relatively normative in spite of the difficulties he has encountered along the way. He is constructively addressing developmental issues and seeking to resolve them. Word Count 2295. ...read more.