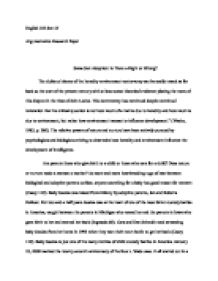 Same s*x Adoption. While society or sectors of society may regard parenting by gay couples with suspicion, there is no convincing scientific evidence to suggest that children raised by same-s*x parents suffer any serious deficits or are deviant in any se

English 105 Sec 25 Argumentative Research Paper Same s*x Adoption: Is There a Right or Wrong? The dubious history of the heredity environment controversy can be easily traced as far back as the start of the present century with at least some historical evidence placing the roots of this dispute in the time of John Locke. This controversy has continued despite continual reiteration that the critical question is not how much of a trait is due to heredity and how much is due to environment, but rather how environment transact to influence development." (Wachs, 1983, p. 386). The relative powers of nature and nurture have been actively pursued by psychologists and biologists striving to determine how heredity and environment influence the development of intelligence. Are parents those who give birth to a child or those who care for a child? Does nature or nurture make a woman a mother? As more and more heartbreaking tugs-of-war between biological and adoptive parents surface, anyone searching for a baby has good reason for concern (Casey 119). Baby Jessica was raised from infancy by adoptive parents, Jan and Roberta DeBoer. For two and a half years Jessica was at the heart of one of the most bitter custody battles in America, caught between the parents ...read more.

A monolithic and highly distorted view of the family has been perpetrated by the mass media, which has completely obscured the emerging variations and alternatives to the conception of a traditional nuclear family. The context of gay and lesbian adoption has been one of bias and unfairness, haphazard and inconsistent policy, and of myths and assumptions informing policy rather than concrete evidence. Gays, lesbians, bisexuals, and transsexuals regularly have encountered discrimination in the legal system, the child welfare system, and in their experiences with adoption agencies. However, most birth parents now are far from this picture. Most birth mothers are in their 20s and 30s. Most of them are already parents, who are struggling to make ends meet. Many are married immigrants, who are working two jobs to send money for children left behind in their native countries. What they have in common, observes Judith Freedman of the Massachusetts-based Jewish Family and Children's Service, is that most of them do not believe in abortion, and that all of them love their child (Keva). Typical birth parents include Joe Polenzani and his girlfriend, who faced the dilemma of an unplanned pregnancy when they were in college. ...read more.

Despite the court rulings and societies' opinions, gays and lesbians are acquiring children. Whether it is from a previous heterosexual marriage that went badly, artificial insemination, an agreement between a gay and lesbian, or co-parent adoption, gays and lesbians will continue to fight for their rights and find ways to create a family of their own. The most effective way that seems to meet everyone's needs is co-parent adoption. Perhaps the states that allow co-parent adoption will be more likely to allow complete gay and lesbian adoption rights in the future. This hypothesis seems very probably. Studies are constantly being done to attempt to find the effects on the children of these families. Results of these types of studies vary. It is hard to make accurate assumptions based on the fact that many gay and lesbian families live in secret. We are on the right track with gaining acceptance of h********l lifestyles, but society still has a long way to go. In my opinion there are four things that must be taken into account when considering the issue from a non-biased stand point one, the rights of the gays and lesbians two, the rights of the child three, the way society will treat the child and four, the psychological effects on the child. ...read more.