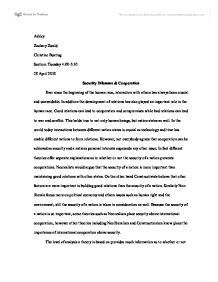 Ashley Zachary Zwald Christine Bunting Section: Tuesday 4:00-5:10 20 April 2010 Security Dilemma & Cooperation Ever since the beginning of the human race, interaction with others has always been crucial and unavoidable. In addition the development of relations has also played an important role in the human race. Good relations can lead to cooperation and compromises while bad relations can lead to war and conflict. This holds true to not only human beings, but nation states as well. In the world today interactions between different nation states is crucial as technology and time has enable different nations to form relations. However, not everybody agrees that cooperation can be achieved as security and a nations personal interests supersede any other issue. In fact different theories offer separate explanations as to whether or not the security of a nation prevents cooperations. Neorealists would argue that the security of a nation is more important than maintaining good relations with other states. On the other hand Constructivists believe that other factors are more important in building good relations than the security of a nation. ...read more.

Instead they believe in "creating institutions...internalizing new understandings of self and other, of acquiring new role identities" (Wendt 417). Through the process of socialization the constructionist theory is open to changes and they believe that cooperation does not have negative effects. The degree of importance a specific theory places in anarchism is also very important in creating a self-reliant notion. This notion determines if security issue deters states from cooperating with one another. Neorealists are strong advocates of the self-help notion, therefore they place of the security of a state above any other issue. This means that without any sense of trust, states can only rely on themselves for protection as explains by Mearsheimer, Anarchy creates two main problems: Distrust and Self-Reliance (Mearsheimer 12). This dependence on anarchy only motivates states to be aggressive towards other states as they believe this is the best way to gain more power. Neorealists and Neoliberals share similar views on anarchy, since they believe that a state is self-interested. ...read more.

Neoliberals on the other hand have a more moderated view on relative gains. Instead they strongly promote interdependence between different states. Instead of dispensing all their resources on security they believe that military allies should "actively seek interdependence to provide security" (Keohane 9). The big difference between Neoliberals and Neorealists is that Neorealists hold strong insecurities in human nature, while Neoliberals are more able to use to reason and be more trusting which gives them the ability to cooperate more than Neorealists. Constructionists are not concerned with either relative gains or absolute gains rather they worry less about "short-term survival and relative power and can thus shift their resources accordingly" (Wendt 415). Constructionist focus more on behavior and they believe that they are forms of cooperation that are important than the security dilemma. While Neorealism places the importance of national security above international cooperation, Neoliberal and Constructionists can reason the importance of international cooperation. There are many factors that determine whether how important the security of a nation really is, including anarchy, state-system, and absolute vs. relative gains. Interaction amongst nations has become unavoidable with the turn of the new century and with it the importance of cooperation has grown. ...read more.