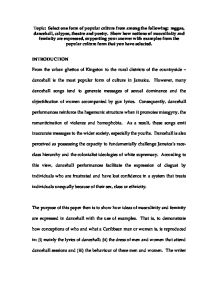 Select one form of popular culture from among the following: reggae, dancehall, calypso, theatre and poetry. Show how notions of masculinity and feminity are expressed, supporting your answer with examples from the popular culture

Topic: Select one form of popular culture from among the following: reggae, dancehall, calypso, theatre and poetry. Show how notions of masculinity and feminity are expressed, supporting your answer with examples from the popular culture form that you have selected. INTRODUCTION From the urban ghettos of Kingston to the rural districts of the countryside - dancehall is the most popular form of culture in Jamaica. However, many dancehall songs tend to generate messages of s****l dominance and the objectification of women accompanied by gun lyrics. Consequently, dancehall performances reinforce the hegemonic structure when it promotes misogyny, the romanticization of violence and homophobia. As a result, these songs emit inaccurate messages to the wider society, especially the youths. Dancehall is also perceived as possessing the capacity to fundamentally challenge Jamaica's race-class hierarchy and the colonialist ideologies of white supremacy. According to this view, dancehall performances facilitate the expression of disgust by individuals who are frustrated and have lost confidence in a system that treats individuals unequally because of their s*x, class or ethnicity. The purpose of this paper then is to show how ideas of masculinity and feminity are expressed in dancehall with the use of examples. That is, to demonstrate how conceptions of who and what a Caribbean man or woman is, is reproduced in: (i) mainly the lyrics of dancehall; (ii) the dress of men and women that attend dancehall sessions and (iii) the behaviour of these men and women. The writer will then conclude with a summation of the arguments presented in the paper and offer an opinion as to the possible future effects of dancehall on gender/power relations. Dancehall or deejay music is the newest, often shocking, musical phenomenon to emerge on Jamaica's popular music scene. John Storey suggests that "popular culture is a site of struggle between the forces of resistance of subordinate groups in society, and the forces of incorporation of dominant groups in society. ...read more.

Even if she claims to be receiving pleasure or power from her style of dress and the way she moves, that pleasure and power is more beneficial to the man who seeks her as a s****l object waiting for him to plunder and conquer. Women have been discouraged from assuming the position of active s****l initiator in their role as singers and DJs but in the higher levels of the business, such as record production, artist management, and advertising, women, usually from a middleclass background, are somewhat better represented. However, this again is another form of patriarchy because women are not supposed to get involved in anything that may question their ladylike status or shatter society's conceptions of woman as decent and nice while men are free to whatever they want without facing any censured statements from society. This is also ironic in the sense that the woman is at the higher level of management but the artiste under her administration is perpetuating her subordinate state in society through his lyrics. Therefore, in the end the man wins. Several dancehall songs present women as s****l objects with their sexuality or s****l organ waiting for the challenge of a man. For instance in Spragga Benz's "Pum Pum Conqueror", a woman is defined by the fact that she has a v****a and regardless of its size, shape, elasticity or colour , his only purpose is to conquer it : Pum Pum Conqueror, Pum Pum Conqueror, Pum Pum Conqueror Pum Pum Conqueror Pum pum fat pum pum slim pum pum bushy and pum pum trim Pum pum black pum pum brown pum pum heavy than a hundred pound Pum pum skinny and pum pum fat pum pum tight and pum pum slack Pum pum rich and pum pum poor pum pum nuff and wi still want more Sometimes women are completely dehumanized and objectified in some of these songs: Peanut and steamfish mi must breed somethin (Yuh tink mi ah drink my callaroots why fi nuttin? ...read more.

The degradation of women, however, does not go unchallenged as artistes who have become frustrated with the unequal treatment given to women, have risen up with counter lyrics that praise and honour women instead. Although these lyrics are sometimes a reflection women's subordinate state, it is an open door through which Caribbean women can continue to remind society of their existence independent of an attachment to a men. Dancehall is often seen as a culture whose expression doesn't emit positive messages in society but one should not take it at face value. Rooted in dancehall is the expression of a subordinate or "forgotten" people that use dancehall lyrics as a medium for expressing their frustration at a system that they believe is built to preclude them. This is demonstrated in Bounti Killa's rendition of "Poor People Fed Up": Poor people fed up Cause the system sheg up In this way, gender and class share a similar relationship. The persons at the lower class are discriminated against because of their social status and as such are not given fair and equal treatment in society. In terms of gender, because women are the "lesser" s*x, they are not given fair and equal treatment either. Therefore, dancehall tends to reflect the mood of the disadvantaged. As far as expressions of masculinity and feminity in the dancehall are concerned, men are still dominant and women are inferior but this is changing. Women have entered the dancehall arena as performers but they need to emancipate themselves from the shackle of the male gazer and create an original female gaze. Other male artistes are now defending the rights of women as human being and worthy of respect. However, it will take a more concerted effort by our women to bring about change. This involves women who perform, women who are in administrative positions and women who listen to these songs. This is something that affects us and if we want to bring about change then we have to consistently use every medium available to us to enhance our status in society. ...read more.