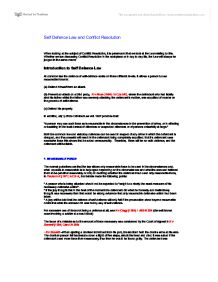 Self Defence Law and Conflict Resolution

Self Defence Law and Conflict Resolution When looking at the subject of Conflict Resolution, it is paramount that we look at the Law relating to this. Whether we are discussing Conflict Resolution in the workplace or in day to day life, the Law will always be judged in the same manor Introduction to Self Defence Law At common law the defence of self-defence works on three different levels. It allows a person to use reasonable force to: (a) Defend himself from an attack. (b) Prevent an attack on a third party, R v Rose (1884) 15 Cox 540, where the defendant who had fatally shot his father whilst the father was severely attacking the defendant's mother, was acquitted of murder on the grounds of self-defence. (c) Defend his property. In addition, s3(1) of the Criminal Law Act 1967 provides that: "A person may use such force as is reasonable in the circumstances in the prevention of crime, or in effecting or assisting in the lawful arrest of offenders or suspected offenders or of persons unlawfully at large." Both the common law and statutory defences can be used in respect of any crime in which the defendant is charged, and if successful will result in the defendant being completely acquitted. ...read more.

She then hit the man forgetting she was holding a glass. The trial judge directed the jury that self-defence was only available as a defence if the defendant had first shown an unwillingness to fight. The Court of Appeal quashed the defendant's conviction saying that it was unnecessary to show an unwillingness to fight and there were circumstances where a defendant might reasonably react immediately and without first retreating. It was up to a jury to decide on the facts of the case. Therefore it is a matter for the jury to decide as to whether the defendant acted reasonably in standing his ground to defend himself, or whether the reasonable man (The Man on the London Omnibus) would have taken the opportunity to run away. 3. Imminent threat of attack It is not necessary that the defendant be attacked first. In Beckford v R [1988] AC 130: Lord Griffith said "A man about to be attacked does not have to wait for his assailant to strike the first blow or fire the first shot; circumstances may justify a pre-emptive strike." This factor has been used to great extent in many domestic violence cases, where quite often there is not always the imminent threat of attack. ...read more.

Lord Griffiths commented that juries should be given the following guidance: "Whether the plea is self-defence or defence of another, if the defendant may have been labouring under a mistake as to facts, he must be judged according to his mistaken belief of the facts: that is so whether the mistake was, on an objective view, a reasonable mistake or not." The defendant therefore, did actually have a defence of self-defence because the killing was not unlawful if, in the circumstances as he perceived them to be, he had therefore used reasonable force to defend himself. 5. INTOXICATION AND SELF-DEFENCE Quite often drunken person may act violently, mistakenly believing himself to be under attack. What is the position where such a person makes a mistake as to a "defence"? The courts view is that a drunken mistake, no matter how genuinely believed, is not a defence to a criminal charge - not even to crimes of specific intent. The two leading cases are: � R v O'Grady [1987] 3 WLR 321 - The defendant awoke in a drunken state, he then hit his friend to death beliving he was attacking him. � R v O'Connor [1991] Crim LR 135 - The defendant who head butted somebody to death tried to use the excuse of being drunk. Both cases would not allow the excuse of being drunk as a defence ...read more.