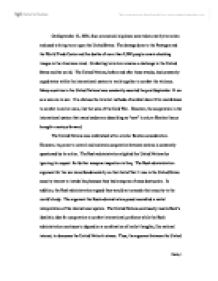 Hans Blix explains France, Germany, and Russia "declared in a memorandum to the president of the Security Council that the priority should be to achieve the full and effective disarmament of Iraq peacefully."19 The Bush administration, wrapping themselves in the realist concept of national interest, did not share the same confidence in the international system or as it seems, the United Nations. Therefore, the United Nations and its idealist thought is extensively criticized by realist thought and accordingly, the Bush administration. Max Weber, a realist thinker, would be highly critical of these idealist thoughts. Weber expresses the state as "a human community that (successfully) claims the monopoly of the legitimate use of physical force within a given territory."20 Furthermore in "Politics as a Vocation," Max Weber writes: "the state is considered the sole source of the 'right' to use force. Hence 'politics' for us means striving to share power or striving to influence the distribution of power either among states or among groups within a state."21 Weber believed that there was not a system of cooperative states but rather a continuous discussion of "politics" in the international system, which simply translates as a discussion of who receives what in the power struggle. As Weber further writes: "When a question is said to be a 'political' question...what is always meant is that interests in the distribution, maintenance, or transfer of power are decisive for answering the question and determining the decision."22 Weber basically asserts the politics of the international system is not a discussion for peace but rather an argument over whose interests will be satisfied. Hence, for Weber, Kant's and the United Nation's vision of the cooperative and cosmopolitan constitution established among the states would be incomprehensible in an anarchic system of states whose politics is fundamentally whose interests will be satisfied. The Bush administration continually asserts peace in the Middle East is in the interest of the United States and the Middle East. ...read more.

Nevertheless, the United Nations and the United States have created a contemporary debate of idealism and realism over Iraq and other issues. Furthermore, this contemporary debate does not seem to have an end in the near future. With Syria and Iran at the top of the list, the Bush administration appears poised to evoke the state interest of national security to remove any tyrant leader or regime posing any form of a threat. Despite assertions that the post-September 11 era requires a reexamination of international politics, a debate dating back centuries, idealism versus realism, remains the accurate frame in which international politics is discussed. Recognizing which thought one supports presents many problems. Supporting idealism, one must be prepared to explain why many groups, like the Rwandan Hutus, Al Qaeda, and the Bush administration have difficulties finding peaceful settlements for disputes. In addition, one must also be prepared to explain why many human rights are disregarded within many states. On the other hand supporting realism, one must be prepared to explain why the United Nations has lasted this long. Also, one must be prepared to explain why intergovernmental organizations like the World Trade Union (W.T.O.), European Union, and North Atlantic Treaty Organization (N.A.T.O.) have experienced great success. Consequently, an examination of the international system may still leave a person wondering about the pros and cons of each. Narrowing the issue to national security, which is ultimately the foundation to the Bush administration's realist argument, may make for a less problematic discussion. When someone or something poses a threat to a state's security, what is the state entitled to do and not to do? Should the United States do as Victor Hanson has claimed failed: "Turn the other cheek and say, 'What's a few American volunteers killed in Lebanon or the Sudan when the stock market is booming and Starbucks is sprouting up everywhere?"38 Or should the United States do what the Bush administration ultimately did and attack the threat? These types of questions should guide the international debate on terrorism. ...read more.