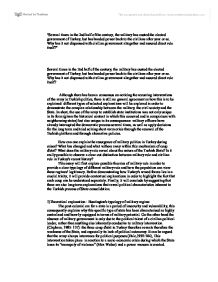 Several times in the 2nd half of the century, the military has ousted the elected government of Turkey, but has handed power back to the civilians after year or so. Why has it not dispensed with civilian government altogether and assured direct rule it

Although long term trends and common practices can be noticed from a distant perspective, it is still necessary to outline the specific context of each crisis and the coup it triggered. Some have argued that specific reforms implemented by the military after the coup do not only reflect the socio-political context in which they take place (neoliberal reforms, state planned economy, democratic elections) but also reflect the ideology the military has adopted. According to Birand, despite the army's political influence over civilian institutions in terms of organization, hierarchy and discipline, it is still a "microcosm of the larger society in which they are embedded" (Birand, 1987:3). Huntington proposes a slightly different account of military evolution because he correlates this behavioural transformation with societal change: "As society changes, so does the role of the military. In the world of oligarchy, the soldier is a radical, in the middle-class world he is a participant and arbiter; as the mass society looms on the horizon he becomes the conservative guardian of the existing order. Thus the more backward a society is, the more progressive the role of its military; the more advanced a society becomes, the more conservative and reactionary becomes the role of its military." (Clapham, 1985:144) To illustrate the argument whichs links specific historical phases to the economic reforms undertaken by a politicized military, some have argued that the promotion of state-planned economy by the junta in 1960 through the implementation of import-substistuting industrialisation, state allocation of foreign exchange and credit, and expansion of welfare entitlements in order to pursue social and industrial cooperation was reflected by the general trend of organising a national economy around state owned enterprises (Bromley, 1994: 127). ...read more.

Moreover, some have also argued that the military's influence is still present in the political arena but that its interventions are more subtle and discreet: most recently, it maneuvered the removal of an Islamic-oriented prime minister, Necmettin Erbakan, in 1997. The Turkish army is clearly not a Latin American army because it is organically connected to two other components: the civil society and the state. If the state or the civil society acts anti-constitutionally, the army will logically step in to re-establish this fragile balance of political power. It will also ensure that the Kemalist institutional legacies are preserved because this has always determined the political autonomy and conditioned the level of resources it utilises. What is unique in the Turkish political process is the link the army maintains with political elite and its interest in preserving economic and social progress that seem to derive from Ataturk's will. Whether or not the army is genuinely only politicised during a short period of coup d'etat seems to depend on the view one can have about the nature of the Turkish state: some may argue that its lack of autonomy will force the army to take over governance during a short period of time, while others may perceive the various coup as strong political signals in order to demonstrate the level of influence the army can have toward different types of political pressures. As Turkey tries to reform in order to integrate the European Union, it can be imagined that the army will continue to act in this way by using a "soft power": in other words, it can be supposed that the army will try to sustain these political manipulation in a more subtle way. ...read more.