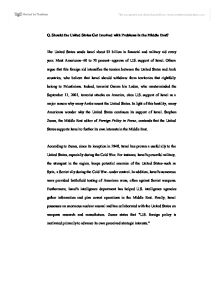 Should the United States Get Involved with Problems in the Middle East?

. The balloting placed the United States Embassy in Cairo in a very difficult position. Called upon for a comment, the Embassy simply said that it took cognizance of the fact that there were reports of fraud in the voting. This response pleased no one. The Egyptian government was enraged, with government newspapers rejecting what they termed American interference in the domestic affairs of Egypt. Advocates of democracy and human rights questioned why Washington would keep silent in the face of such massive fraud. Egyptian liberals with whom we spoke were genuinely puzzled and hurt that the United States would not even provide verbal support to a cause--free elections--that Washington actively encourages elsewhere. Egyptian Islamists did not have to be told why: the United States prefers the increasingly autocratic Mubarak regime to any democratic alternative, because that alternative would inevitably be more "Islamic." Thus the American waffle on "democracy" in Egypt irritated a pivotal Middle East ally without gaining the United States any friends in Egyptian society. Far from settling issues, the Egyptian elections have only raised tensions and increased the political polarization in the country. . . . Is the clash between American values and American interests in the Muslim Middle East insoluble? No. The United States in fact has an interest in dealing with stable, broadly based regimes in the region. Encouraging our friends to open up their political systems, in an evolutionary way, is the best way Washington can help to assure their long-term stability. We should be clear that, while near-term democratic transitions in key Middle East allies are not in America's interest, gradual steps toward more participatory politics are. The leverage the United States can use in this direction is limited, because of the immediate and important American interests at stake in our relations with a number of Middle East regimes. But such leverage does exist. The first step Washington should take is to confront America's own hypocrisy on the democracy question. ...read more.

We would be seen as ignoring a key interest of the Muslim world in order to satisfy what is seen to be a narrow American interest. Even without Israeli involvement, the results could well destabilize Arab regimes in the region, ironically facilitating one of Saddam's strategic objectives. At a minimum, it would stifle any cooperation on terrorism, and could even swell the ranks of the terrorists. Conversely, the more progress we make in the war on terrorism, and the more we are seen to be committed to resolving the Israel-Palestinian issue, the greater will be the international support for going after Saddam. If we are truly serious about the war on terrorism, it must remain our top priority. However, should Saddam Hussein be found to be clearly implicated in the events of Sept. 11, that could make him a key counterterrorist target, rather than a competing priority, and significantly shift world opinion toward support for regime change. In any event, we should be pressing the United Nations Security Council to insist on an effective no-notice inspection regime for Iraq--any time, anywhere, no permission required. On this point, senior administration officials have opined that Saddam Hussein would never agree to such an inspection regime. But if he did, inspections would serve to keep him off balance and under close observation, even if all his weapons of mass destruction capabilities were not uncovered. And if he refused, his rejection could provide the persuasive casus belli which many claim we do not now have. Compelling evidence that Saddam had acquired nuclear-weapons capability could have a similar effect. In sum, if we will act in full awareness of the intimate interrelationship of the key issues in the region, keeping counterterrorism as our foremost priority, there is much potential for success across the entire range of our security interests--including Iraq. If we reject a comprehensive perspective, however, we put at risk our campaign against terrorism as well as stability and security in a vital region of the world. ...read more.