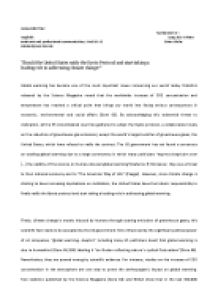 Should the US ratify the Kyoto Protocol and start taking a leading role in addressing climate change?

ï»¿Universität Trier Fachbereich II – Anglistik Lang 202 Written academic and professional communication, Wed 10-12 Sören Klohe s6sokoh@uni-trier.de "Should the United States ratify the Kyoto Protocol and start taking a leading role in addressing climate change?" Global warming has become one of the most important issues concerning our world today. Statistics released by the Science Magazine reveal that the worldwide increase of CO2 concentration and temperature has reached a critical point that brings our world into facing serious consequences in economic, environmental and social affairs (Gore 66). By acknowledging this existential threat to civilization, all the 55 industrialized countries gathered to adopt the Kyoto protocol, a collaborative treaty on the reduction of greenhouse gas emissions; except the world´s largest emitter of greenhouse gases, the United States, which have refused to ratify the contract. The US government has not found a consensus on tackling global warming due to a large controversy in which many politicians “express skepticism over […] the validity of the science on human-induced global warming”(Carlarne 7) Moreover, they see a threat to their national economy and to “The American Way of Life” (Paeger). ...read more.

is a threat to the Earth´s future”(Gore 269). Secondly, the United States as the world´s most influential economic and political power can catalyze climate change counteractions and simplify global regime building. The United States´ refusal to accept emission reduction obligations is blocking international efforts towards climate regime building. Since the US is responsible for 30,3% (2006) of the world´s carbon emissions (Gore 250) their non-participation makes it almost impossible to achieve the Kyoto targets to reduce emissions by 5,2% below the 1990 levels. It “pushed the Protocol to the brink of collapse”(Carlarne 9). Additionally, a turnaround in their climate policy is of an immense symbolic value. For example, there is a good possibility that a low carbon economy will get countries like China and India, which have not agreed on reduction obligations, either, into adopting a similar course. Due to strong economic integrations (Weltalmanach 210, 418), these countries would be forced to adapt their products to the new American standards. In addition, a transition to a low carbon economy not only will strengthen the US economy but also safe it from being left behind by economically and technologically progressive countries in Europe and Asia. ...read more.

It is causes severe problems in many countries. During this century we observe a rising number of refugees due to global warming. They are displaced by environmental events like droughts or rising sea levels but also political conflicts (Mazo 39). For example, UN Secretary- General Ban Ki-moon makes human-caused climate change jointly responsible for the Darfur Crisis (Mazo 73). Therefore, not changing the US policy would be a crime to humankind. In sum, the USA needs to immediately ratify Kyoto to set a symbol of change in their policy. Further, the US must agree on emission reduction targets to pave the way to a post-Kyoto agreement established by an international climate change regime in which the USA take on a leading role. Unfortunately, despite the Obama administration´s efforts to start the change the Congress remains deeply divided so that “the US continues to lack any […] finalized legal regime for regulating greenhouse gas emissions”(Carlarne 8). The United States´ course in their climate policy is decisive whether humankind will successfully attack global warming. To conclude with the words of Nobel Peace Prize winner Al Gore: “It [the earth] is our only home. That is what is at stake. ...read more.