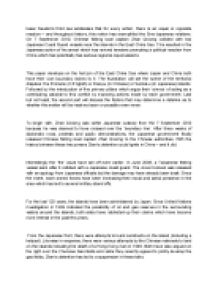 ﻿Isaac Newton?s third law addresses that for every action, there is an equal or opposite reaction ? and throughout history, this notion has exemplified the Sino-Japanese relations. On 7 September 2010, Chinese fishing boat captain Zhan Qixiong collided with two Japanese Coast Guard vessels near the islands in the East China Sea. This resulted in the Japanese action of his arrest which has revived tensions prompting a political reaction from China which has potentially has serious regional repercussions. This paper develops on the horizon of the East China Sea where Japan and China both have their own boundary claims to it. The foundation will set the scene of the territorial disputes: the Pinnacle (in English) or Diaoyu (in Chinese) or Senkaku (in Japanese) islands. Followed by the introduction of five primary pillars which argue their ?crimes? of acting as a contributing catalyst to this conflict by exploring actions made by each government. Last but not least, the second part will discuss the factors that may determine a dateline as to whether this matter will be resolved soon or possible even never. To begin with, Zhan Qixiong was within Japanese custody from the 7 September 2010 because he was deemed to have crossed over the ?boundary line?. After three weeks of diplomatic rows, protests and public demonstrations, the Japanese government finally released Chinese fishing boat captain Zhan Qixiong to the Chinese authorities. With the history between these two powers Zhan?s detention could ignite in China ? and it did. Interestingly the ?fire? could have set off even earlier. In June 2008, a Taiwanese fishing vessel sank after it collided with a Japanese coast guard. The crew involved was released with an apology from Japanese officials but the damage may have already been dealt. ...read more.

This illustrates a notion that though the association of China and democracy would be a contradiction, China does take account of the majority public?s perspectives. Outburst from the people, be it criticisms or sensitive comments become an incentive for the government to have a firmer nationalist figure in the fear of losing political stability. It is this fear of criticism by Chinese ?netizens? that could be behind China?s decision to take such a stubborn stance on not just the Senkaku islands but all of its territories. Yet public opinion is the people?s freedom of expression and even they have mixed views on this matter. Thus the media is not the guilty party. Ultimately, it lays down to the Chinese leader who use the media as a device to launch their nationalist view and that constructs the fifth cornerstone of this study. Although the Chinese media is beyond transparent, the state-controlled media no longer monopolizes information going into and coming out of China. This fracturing of channels of communication into and out of the country has allowed average Chinese citizens to formulate their own opinions on the subject of the dispute. The ability to sidestep the Chinese Communist Party control of expression increasingly influences Chinese foreign policy. Of course it has had to struggle of reaching the delicate balancxe of allowing disgruntled citizens room to express their displeasure and prevent it from becoming combustible as well as possibly turning against the Party. Yet even with this fear in mind China?s Communist Party has selectively ?allowed? some public outcries against foreign entities while always trying to contain them so that they don?t get out of hand. For instance the government media took advantage of the accidents and staged media coverage of 1999 anti-US protests following the Belgrade embassy bombing and the 2005 anti-Japanese riots. ...read more.

China has just become Japan?s biggest trading partner while Japan is China?s second biggest trading partner with total trade if nearly US$ 230 billion in 2009. Japan has the second biggest contingent of foreign students in China (over 13,000 in 2008) and the recent cancellation of an exchange tour for Japanese youths to the World Expo in Shanghai as a result of Zhan?s detention is unlikely to hinder this development. Unfortunately there does not seem to be elements within the Chinese government that is keen to prolong this row. Not long after Zhan?s arrest, four Japanese civilians were subsequently detained in China on charges of spying and Beijing apparently ordered a temporary halt of exports of rare earths to Japan that are essential to Japanese automakers? operations. Many foresaw this as ?tit for tat? retaliation on Zhan?s detention. According to reports, attempts by the Japanese ambassador to China to discuss the detention of these nationals with the Chinese Foreign Ministry have so far been rebuffed. Consequently, with the unresolved history between China and Japan coupled with Japan?s uncertainty on how to deal with an increasingly affluent, assertive and dominant China, we can expect Sino-Japanese relations to continue to ebb and flow. Essentially the territorial dispute over the Diaoyu or Senkaku islands is unlikely to resolve anytime soon nor in the next few decades. China and Japan both realise that conflict could economically cost them and both countries are still deeply submerged in their own domestic dilemmas. However if China?s military prowess continues its advancement, so will China?s political demands. As Mao Zedong once said,? Political power grows out of the barrel of a gun? ? China?s rising military force may prove to be the catalyst towards a catastrophic territorial conflict which will have direct and indirect implications to the whole region creating concerns over a future dominated by China ? again. ...read more.