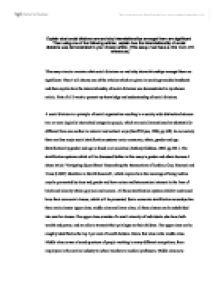 Castes were ranked in terms of ritual purity. The Brahmins or priests, members of the highest caste, personified purity, sanctity and holiness. They were the source of learning, wisdom and truth. They alone performed the most important religious ceremonies. At the other extreme, untouchables were defined as unclean, base and impure, a status that affected all their social relationships. They had to perform unclean and degrading tasks such as the disposal of dead animals. They were segregated from members of the caste system and lived on the outskirts of village or in their own communities. The Brahmins were custodians of the law, and the legal system they administered was based largely on their pronouncements. Inequalities of wealth were usually linked to those of prestige and power (Holborn, Haralambos, Heald, 2004, pp.1-2 ). In other hand, people who belong to lower social groups have a common identity, similar interests and a similar lifestyle with people who belong to higher social groups. The main different between social groups are social inequality which usually occurs in social life. George Orwell said: 'All animals are equal but some animals are more equal than others'. This quotation describes main differences between social divisions. The example of caste system displays how interrelationships amongst social divisions influence society. Interrelationship is a logical or natural association between two or more things. ...read more.

As a theory, intersectionality requires complex and nuanced thinking about multiple dimensions of inequality and difference. Author use three types of intersectionality: methodological, structural and political to explore how the meanings of being lesbian may be permeated by class and gender and how racism and heterosexism intersect in the lives of black and minority ethnic gay men and women (Julie Fish). This research paper displays differences between social divisions. Lesbians appear to be more likely than white lesbians to maintain strong involvements with their families, to have children, to have continued contact with men and their heterosexual peers and to depend on family members for support, they may also be more likely to identify as lesbians and to have had sexual experiences with women. Furthermore the linguistic ease and communicative competence of the middle-classes distinguish them from working-class lesbians (Julie Fish). These differences between social divisions display relevance of interrelationships and also improves that interrelationships are very significant between social divisions. In conclusion I would like to say that there are a lot of social divisions and most of them have something in common, also all people belong to particular divisions. Furthermore interrelationships amongst social divisions are significant and it may greatly influence our society. Titanic catastrophe showed that belonging to one group or another group can even cost a life. The article about LGBT reveals that race may influence sexual deviation. In my opinion, it is very important to understand the importance of social divisions and interrelationships. ...read more.