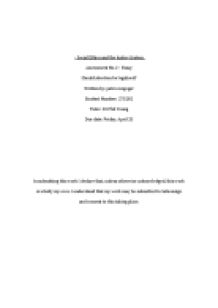 Social Ethics and the Justice System. Should abortion be legalised?

﻿- Social Ethics and the Justice System Assessment No.2 ? Essay Should abortion be legalised? Written by: petro mcgoger Student Number: 275282 Tutor: Dr Phil Young Due date: Friday, April 25 In submitting this work I declare that, unless otherwise acknowledged, this work is wholly my own. I understand that my work may be submitted to SafeAssign and consent to this taking place. Introduction Abortion is one of the most contentious ethical issues faced today. It is the issue of whether abortion should or should not be legalised. This essay will critically analyse whether or not abortion should be legalised by incorporating ethical theory. The two theories, which will be highly examined, are Utilitarianism and Deontology. Throughout this essay, it will be argued, from a utilitarian perspective, that abortion should be legalised. Several key scenarios will be examined, such as abortion in the case of rape, restrictive laws on abortion and the effects, and the effects of unplanned pregnancies with regard to the financial burden on families. These scenarios will be reinforced by statistics, theories, and recent research in the area of abortion explaining the negative impact of keeping abortion illegal in societies. Utilitarianism As abortion is one of the most contentious ethical issues in Australian society today, it is therefore necessary to analyse abortion through the ethical perspective, in particular Utilitarianism. ...read more.

Whilst deontology has merit in its argument, the issue from a utilitarian perspective lies within the premise that there is no thought for the possible consequences of actions. This is a direct violation of the utilitarian perspective, which focuses on the consequences of actions and bringing about the greatest good for the greatest number. Also, the duty should not be allocated to the mother as she was not in control. An example that clearly illustrates this situation from a different picture is Judith Thomson?s analogy. This is about a random person who is attached to a violinist for 9 months in which will ultimately save that violinists life (Singer 2011, 132). The parallels with this example are very similar to that of the case of pregnancy due to rape; however, Singer suggests that many individuals would not see an ethical dilemma if the random were to remove themselves as it was not their duty (Singer 2011, 133). Abortion 2nd point- Bad abortions killing women A further argument to legally allow abortion is for the purpose of eliminating unsafe abortions. Many argue that the restrictive laws in many countries are severely detrimental to livelihoods of pregnant women. The World Health Organisation found that in 2008, over 49% of abortions was unsafe worldwide (Sedgh et al. 2012, 625). Whilst the statistics don?t place emphasis on why the unsafe abortions occur, places such as Argentina (peter singer reference) ...read more.

Once again, a deontologists would argue that we have a moral duty to preserve human life and that we should not use anyone as a means to an end. Secondly, if the mother were to abort for her own self interests it would breach the principle of being impartial in ethical decision making. Utilitarian point Whilst deontology is seen as consistent in it?s ethical approach, a utilitarian cannot agree with such principles. It is clear that in this scenario, no good consequences arise. It is essential, from a utilitarian perspective, that we incorporate the overall happiness and utility to determine an ethical decision. In this scenario the consequences are far more beneficial if abortion was to be legalised, not only for the mother but also the unborn child, and community. The Canadian Royal Commission into the Status of Women reinforces this notion as they state, ?A law that has more bad effects than good ones is a bad law?(Singer 2011,129) Conclusion The aim of this paper has been to critically analyse if abortion ought to be legalised whilst incorporating ethical theory. The theory of utilitarianism was discussed and the topic analysed, whilst also discrediting the theory of deontology. Nonetheless, this essay has demonstrated that abortion needs to be legalised for the sake of women, their families, and also society. It is clear that by not legalising abortion, severe consequences can occur. Therefore, the proposition that, from a utilitarian perspective, the nature and extent of police corruption since the Fitzgerald Inquiry has decreased appears to be correct. ...read more.