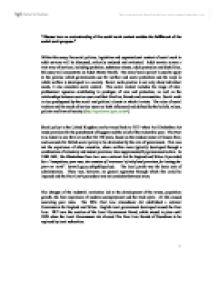 "Discuss how an understanding of the social work context enables the fulfilment of the social work purpose." Within this essay, the social policies, legislation and organisational context of social work in adult services will be discussed, critically analysed and evaluated. Adult service covers a vast array of services, including probation, substance misuse, adult protection and disabilities, this essay will concentrate on Adult Mental Health. The name 'social policy' is used to apply to the policies which governments use for welfare and social protection and the ways in which welfare is developed in a society. Social work practice is not only about individual needs, it also considers social context. This social context includes the range of inter-professional agencies contributing to packages of care and protection, as well as the relationships between service users and their families, friends and communities. Social work is also predisposed by the social and political climate in which it exists. The roles of social workers and the needs of service users are both influenced and defined by the beliefs, values, policies and laws of society. (http://openlearn.open.ac.uk4) Social policy in the United Kingdom can be traced back to 1572 where An Elizabethan Act made provision for the punishment of beggars and the relief of the vulnerable poor. The Poor Law lasted in one form or another for 350 years, based on the residual nature of laissez-faire, and accounts for British social policy to be dominated by the role of government. This was not the experience of other countries, where welfare more typically developed through a combination of voluntary and mutual provision, later supplemented by government action. In 1598-1601, The Elizabethan Poor Law was a national Act for England and Wales. It provided for a "compulsory poor rate, the creation of 'overseers' of relief and provision for 'setting the poor on work". (www2.rgu.ac.uk/publicpolicy). The local parish was the basic unit of administration. ...read more.

Due to a service users mental health needs they are able to receive both residential and non-residential facilities under s.7E (b) of the Local Authority Social Services Act 1970 (LASSA). Established within the NHSCCA 1990 are arrangements for people with Mental Health problems, and the Local Authority Social Services are responsible for planning and purchasing relevant social care services and for assessing the individual to determine what services they require. After an assessment, the service user may have been diagnosed as needing treatment under the Mental Health Act 1983 (MHA). The Mental Health Bill to amend the 1983 Mental Health Act completed its parliamentary stages on 4 July 2007 and has received Royal Assent, becoming the Mental Health Act 2007, which will become law in October 2008 (MIND 2008). Before any application is made for an order, an interview with an appropriate approach must take place (MHA s.13). This would take into account any barriers to communication that may exist including; language, culture, environment. If the service user consents to treatment, then informal admission into hospital may be in the service users best interest (MHA s.131 para 2.7). Under Section 114 of the MHA an Approved Social Worker (ASW) can detain a service user; the application can be made on the basis of a medical recommendation of at least one doctor who has seen the service user within the previous 24 hours, which means that they can be detained for up to 72 hours. Once invoked, the process for a Section 2, 28 day assessment or Section 3 up to 6 months treatment can be started. The s.4 emergency detention is followed by s.2 assessment whereupon the medical recommendation of another doctor is required (http://www.dh.gov.uk 2008). However, Sections 72 and 73 of the Mental Health Act 1983 are incompatible with the European Convention on Human Rights, they state that rather than requiring that the lawfulness of continuing detention should be proven before a mental health review tribunal, these sections effectively reversed the burden of proof by requiring the services user to prove that the conditions for detention were no longer satisfied (Bindman, J.2003) ...read more.