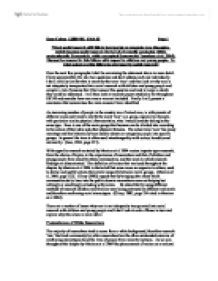 Dana Cairns U288074X TMA 03 Page 1 'Much social research still fails to incorporate an adequate race dimension, mainly because social research (in the UK) is usually conducted within predominantly Eurocentric, white conceptual frameworks' (maniam et al., 2004). Discuss the reasons for this failure with respect to children and young people. To what extent can this failure be addressed by social research? Over the next few paragraphs I shall be examining the statement above in more detail. I have separated the title into two questions and shall address each one individually. I shall initially clarify what is meant by the term 'race' and then look at why race is not adequately incorporated into social research with children and young people and compile a list of reasons that I feel answer this question and look at ways in which they could be addressed. I will then look at research papers studied so far throughout EK310 and consider how race was or was not included. Finally I will present a conclusion that summarises the main reasons I have identified. An increasing number of people in the country are of mixed race, ie with parents of different races and I tend to clarify the word 'race' as a group, especially of people, with particular similar physical characteristics, who I would consider belong to the same type. Race is one of the main groups that humans can be divided into according to the colour of their skin and other physical features. ...read more.

Researchers tend not to have any insight or understanding of Black experiences or perceptions. They rarely go beyond inquiring about the 'needs' of Black communities rather than looking at aspects of human rights. Dana Cairns U288074X TMA 03 Page 3 Biased views held of black minority ethnic people As we saw in the paper by Rassool, 2004 racial discourse in Britain has historically focused on the image of immigrant = alien = problem to be managed through immigration control and social welfare intervention. (Rassool, 2004, page 233). It is because of these dominant social meanings that Black/ethnic children and young people gain the label of problems to be solved. Views of Black and ethnic minority people have been led by various factors and the press can also lead our views. As we saw in the chapter by Maniam et al 2004, a letter from Sir Paul Condon, Commissioner of the Metropolitan Police to the leaders of the Black community was printed in The Guardian newspaper and this provoked debate but also added to the already tarnished image attached to young Black men in London. The actual research base for the figures was uncertain and alot of the figures stated can just be guesswork, but once it has been read in the Press the views tend to get established. (Maniam et al, 2004, page 230). Power Issues Power is about the ability of individuals or groups to make their own concerns count, even when others resist. ...read more.

Throughout the paper she constantly refers to 'a short white girl' or 'a black girl' but never gives any indications of how the schools classes were made up and what the proportions were. She also mentions the crossings of race and ethnic lines. Although in her commentary she states that having two field sites alerted her to the Dana Cairns U288074X TMA 03 Page 5 differences and similarities in the organization and cultures of particular schools there is no evidence of this in the study. (Thorne, 2004, page 272). Over the last few paragraphs I have explained important dimensions of race and ethnicity and how they impact on research with children and young people. Not only in terms of research relations but also in the research methods chosen. What must be remembered is that effective research with Black and ethnic minority children and young people has to remember the lessons of earlier research and take into account constantly changing and evolving discourses. One of the main ways of improving the ways in which race is incorporated into research is to ensure that research with children and young people takes into account the impact of not only race, but also gender and disability in offering different world views of the participants in research. We need to aim to give children more active participation in school/environmental issues and initiatives and let them have a voice that is heard and acted upon. ...read more.