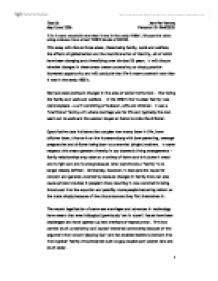 'Life is more uncertain now than it was in the early 1950s'. Discuss this claim using evidence from at last THREE blocks of DD100. This essay will discuss three areas, these being family, work and welfare, the effects of globalisation and the transformation of identity, all of which have been changing and diversifying over the last 50 years. It will discuss whether changes in these areas create uncertainty or simply provide increased opportunity and will conclude that life is more uncertain now than it was in the early 1950's. We have seen profound changes in the area of social institutions - that being the family and work and welfare. In the 1950's the 'nuclear family' was commonplace - a unit consisting of husband, wife and children. It was a 'traditional' family unit where marriage was for life and typically the man went out to work and the woman stayed at home to raise the children. Quantitative data indicates that couples now marry later in life, have children later, divorce is on the increase along with lone parenting, teenage pregnancies and children being born to unmarried (single) mothers. In some respects this means greater diversity in our domestic living arrangements - family relationships may take on a variety of forms and this doesn't mean one is right and one is wrong because what constitutes a 'family' is no longer clearly defined. ...read more.

This could be seen as good or bad, many people don't like the fact that these huge companies put smaller privately owned companies out of business and that everything is becoming so uniformed - local places with 'character' are being lost. Global trade on the whole is increasing which may mean more jobs, better employment prospects for some but on the down side it may also mean many home communities are devastated when local companies are bought out by multi-national ones that cut wages and benefits and/or moves production overseas (as previously mentioned). This will ultimately cause conflict and again creates another area of uncertainty. The development of a global infrastructure - the authority of nations is territorially bound therefore international organisations such as The United Nation, The World Bank, The International Monetary Fund and The World Trade Organisation all play a part in regulating and governing the global system and are new forms of agency brought about because of globalization. It could be argued that in this borderless economy, nation states have no option but to accommodate global market forces due to their power, limiting their options. Furthermore, a growth in international trade (often due to lower trade barriers) ...read more.

but also because they have been exposed to fundamental disagreements through the access of this information (due to the introduction of the internet). The claim that life is more uncertain now compared to how it was in the early 1950's does seem to be attractive in terms of its empirical adequacy. In the past it might appear that people lead more settled, stereotypical lives - the men went to work while the women stayed at home to raise the children. Couples married for life - and employees had a job for life! It was much harder (and more expensive) to travel and it was clearer what was British, what was European and what was the rest of the world. The argument is comprehensive because many changes in many areas have been taking place - at home, at work, within communities, nationally and globally and several of these changes can be cause for concern, especially when the legitimacy of areas such as politics, religion and medicine all seem to be undergoing change. Change (in itself) for many can mean uncertainty and insecurity but of course many of these changes could be interpreted in giving greater opportunities for people (and it certainly means less social stigma if you don't conform) so it's really how we deal with changes that really matters. ...read more.