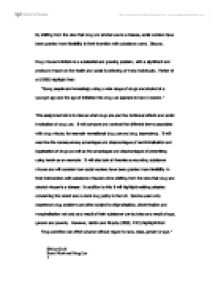 Social work and Drug Use

By shifting from the view that drug and alcohol use is a disease, social workers have been granted more flexibility in their invention with substance users. Discuss. Drug misuse in Britain is a substantial and growing problem, with a significant and profound impact on the health and social functioning of many individuals. Parker et al (1995) highlight that: "Young people are increasingly using a wide range of drugs and alcohol at a younger age and the age of initiation into drug use appears to have lowered." This assignment aims to discuss what drugs are and the individual effects and social implication of drug use. It will compare and contrast the different terms associated with drug misuse, for example recreational drug use and drug dependency. It will examine the consequences, advantages and disadvantages of decriminalisation and legalisation of drugs as well as the advantages and disadvantages of prescribing using heroin as an example. It will also look at theories surrounding substance misuse and will consider how social workers have been granted more flexibility in their intervention with substance misusers since shifting from the view that drug and alcohol misuse is a disease. In addition to this it will highlight existing debates concerning the recent and current drug policy in the UK. Service users who experience drug problems are often subject to stigmatisation, discrimination and marginalisation not only as a result of their substance use but also as a result of age, gender and poverty. However, Harbin and Murphy (2000, P.23) highlight that: "Drug addiction can effect anyone without regard to race, class, gender or age." This assignment will also look at what services and interventions, such as harm reduction strategies, are available to drug misusers and the accessibility of these services. The World Health Organisation (1981, P.227) define a drug as: "Any chemical entity or mixture of entities, other than those required for the maintenance of normal health (like food), the administration of which alters biological function and possibly structure." ...read more.

(http://www.helpwithsmoking.com/effects-of-nicotine.php) Heavy drinking is linked to suicide, murder, fatal accidents, and many fatal diseases. It can increase chances of developing cirrhosis of the liver, and it has been associated with many different types of cancers. However, the NHS Direct (2008) underline that drinking a moderate amount of alcohol will not do any physical or psychological harm. In a recent survey Lifeline publications (2007) highlighted that approximately 114,000 people die every year from smoking tobacco. About 40,000 people die from using alcohol and the least amount of deaths occur as a result of all illegal drugs put together and is about 2,000 people. This clarifies that: "Although drug misuse poses risks to the user and others, from a health perspective it still remains a small problem in relation to the medical harm caused by alcohol and nicotine." (The British Medical Association, 1997). Therefore it is evident that the reason why some drugs are illegal is nothing to do with dangerousness. If drug classification is based on the harm that specific drugs may cause to individuals, families and communities. (NHS Health Scotland, 2004, P.10) then unquestionably nicotine and alcohol would both be classified. However, consideration needs to be given when looking at the above figures because more people may use alcohol and/ or tobacco because they are socially acceptable and hold legal status. If all drugs were legal, or the same amount of people who smoked used illicit drugs, then drug related deaths may significantly increase. However King (2007) suggests that the majority of people who use drugs are able to use them without harming themselves or others. Which means, according to King, the use of illegal drugs is not always harmful anymore than alcohol use is always harmful. Although it is paramount that people are still aware of the risks involved when using legal or illegal drugs. For example high impact adverts explaining the effects on all drugs as well as warning messages on alcohol similar to the messages on cigarette packets. ...read more.

Therefore crime levels may reduce and people would know exactly what they were buying thus possibly preventing overdose. There is a large emphasis on harm reduction strategies, which mainly focus on heroin misuse, and although interventions such as needle exchange services are available for drug misusers they are not always easily accessible. Introducing drug consumption rooms to the United Kingdom has advantages as well as disadvantages. It is a controversial subject and has many contradictions regarding the law. However provided they were supervised and people used them the advantages outweigh the disadvantages. The disease model allows social workers limited flexibility when working with service users who misuse substances as it does not adopt a holistic approach. It also links with the medical model as the individual is regarded as a victim. It suggests that a person with drug or alcohol problems has no choice or control over their decision making thus taking away their personal responsibility. In addition to this it does not take into account harm reduction as the aim of the disease model is complete abstinence. Whereas the wheel of change model takes into consideration the possibility of relapse when working with drug misusers and respects the autonomy of the service user to make their own decisions. It allows social worker more flexibility because it is predominately about empowerment and it seeks to involve the service user changing their behaviour. It adopts a holistic approach when working with people with addictions of any kind and therefore social workers work in partnership with other agencies or professionals to help support the individual with additional problems that link to their substance misuse. The wheel of change model takes into account both physical and psychological factors again allowing social workers more flexibility with their intervention. Although the disease model can work for some individuals it requires limited intervention from social workers whereas the wheel of change model adopts a holistic approach which gives social workers more flexibility when working with service users who misuse substances. ...read more.